Serendipity stands out thanks in most part to its two stars. John Cusack and Kate Beckinsale overcome a clichéd-filled script; to be fair it’s hard not to be clichéd in the romantic-comedy genre. The supporting cast with Jeremy Piven, Molly Shannon and Bridget Moynahan also help out in making this a memorable film that has stood the test of time (at least in the genre) 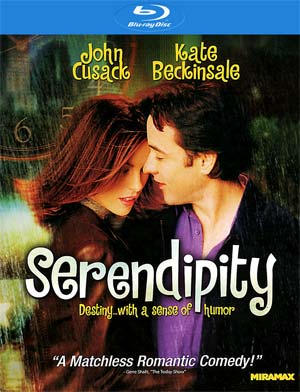 Romantic comedies is a tough genre because on the one hand the plot is more or less the same as a rom-com that has come before and thus is highly predictable but when you try to shake it up, throw in a wrench if you will, then you disappoint a legion of fans. 2001’s Serendipity fits in the former with the usual little twist to discern it from the others.

The story begins in 1994 when Jonathan Trager (JOHN CUSACK) runs into Sara Thomas (KATE BECKINSALE) in a New York City store as they both reach for the last pair of gloves. The two spend time together, eating at a local restaurant, comparing life stories and a magical time in a skating rink. Despite both being in relationships, there’s obviously a spark between the two and after some initial resistance, and her belief in fate, Sara agrees to give her full name and phone number but thanks to a gust of wind, it blows the paper away providing a sign it was not meant to be. After some persistence by Jonathan, Sara suggests to let fate intervene whether or not they should be together by having Jonathan write his name and number on a $5 bill and likewise for hers inside the cover of a book to which she will sell to a local bookstore the next day. After a cute sequence at a hotel and elevators, the two part ways much to Jonathan’s dismay. Yeah, it’s convoluted but they develop a great chemistry that would help sustain the rest of the movie despite having only a relatively short amount of time together.

We fast forward 7 years and find Jonathan still lives in New York and is engaged to a woman named Halley (BRIDGET MOYNAHAN) while Sara has moved to San Francisco, works as a therapist – discarding the idea of fate – and has just been proposed marriage to New Age singer Lars Hammond (JOHN CORBETT). It’s no coincidence that the to-be significant others resembles the other person.

Of course, just as both of their lives is about to make a 180 degree turn with marriage, in a last ditch effort, both Jonathan and Sara make one last attempt to find one another. Each receives support from their zany best friends, Dean (JEREMY PIVEN) for Jonathan and Eve (MOLLY SHANNON) for Sara. Jonathan does some detective work to track Sara down while she takes a trip to New York and uses intuition. Will Jonathan and Sara ever meet again or will they settle for their second place significant others? Even if you haven’t managed to catch this flick on Lifetime, you know what happens… Alright, first things first: The reason Serendipity works as well as it does is thanks to the cast and, especially, Cusack and Beckinsale, share great chemistry that lasts for the duration of the film until the end when they meet once more (sorry, spoiler warning!) and during their own journeys through New York, they keep the energy levels going that as a viewer, you’re never bored or restless waiting for the inevitable as so often happens with poorly written/acted romantic comedies.

Cusack really is no different from the characters he played in the late 90s, early 2000s, sort of like Eeyore from “Winnie the Pooh”, down on his luck while fast sputtering out quips, quotes and everything in between (see: High Fidelity and America’s Sweethearts; note: not making a statement on the quality of either films, just on his characters). Of course, Cusack also has had success in drama as demonstrated in Midnight in the Garden of Good and Evil, Pushing Tin and Being John Malkovich (just films released prior to this one).

Kate Beckinsale has also had an interesting career starting off with romantic comedies before finding more notoriety, especially on the Internet thanks to the latex wardrobe, with the Underworld movies. Here, as in her dramas and comedies, while the character isn’t written particularly well, she’s absolutely magical. There are only a select few actors and actresses who light up the screen every time and here, Beckinsale shines; in conjunction with Cusack, the pair makes what might otherwise be a forgettable/clichéd romantic comedy into something special. Serendipity was helmed by Peter Chelsom whose illustrious career includes Town & Country and Hannah Montana: The Movie as well as Shall We Dance. It was written by Marc Klein whose only other credited work was the Ridley Scott/Russell Crowe drama, A Good Year and the clumsy drama-comedy, Suburban Girl. Neither men have had a great career but they do well enough to at least allow the stars to connect and make the movie far better than it probably should have been.

Most of the features have been ported over except for a photo gallery and outdated bios.

Feature Commentary – Director Peter Chelsom provides an informative commentary track talking about working with the actors, the story and shooting at certain locations. It’s not a particularly lively track with a few moments of silence, but those who like to know the ins and outs of making a motion picture might get something out of it.

Behind-the-Scenes: Starz Encore “On the Set” (19:54; SD) is your EPK featurette made only to advertise the film and get people to see it in the theater. This includes some interviews with the cast talking about the plot and their characters.

Peter Chelsom’s Production Diary – These are written notes from the director writing about filming the movie day to day.

Deleted Scenes (15:50; SD) – This is a collection of 9 scenes that didn’t make it into the film for one reason or another, but most likely for pacing. These are accompanied with optional commentary.

Storyboard Comparison (0:45; SD) – Here you can check out the original storyboards for one scene with a shot from the film.

Previews – The Switch, From Prada to Nada, Killers, 40 Days and 40 Nights Lionsgate gives the romantic comedy new life on Blu-ray with a humdrum 1.78 aspect ratio (original AR was 1.85) and 1080p high-def. While this transfer is better than its DVD counterpart, released back in 2002, it still doesn’t look brilliant in HD either. Colors seem to be a tad muted; the detail levels just aren’t there as some scenes look very soft; and every so often I did notice some dust marks. I also have a feeling that some sort of edge enhancement was applied, though it might’ve been minimal. As it stands, the transfer is OK but I wouldn’t go rushing out to upgrade unless the price is right.

The disc comes with a lossless DTS-HD MA 5.1 track but given this is a romantic comedy, there’s not a whole lot here to measure. We do get some choice romantic/comedic songs and/or melodies sprinkled here and there and the dialogue sounds crystal clear, but otherwise it’s kind of a mundane track, though still perfectly suitable. Overall, Serendipity stands out thanks in most part to its two stars. John Cusack and Kate Beckinsale overcome a clichéd-filled script; to be fair it’s hard not to be clichéd in the romantic-comedy genre. The supporting cast with Jeremy Piven, Molly Shannon (whom I normally cannot stand) and Bridget Moynahan also help out in making this a memorable film that has stood the test of time (at least in the genre). The Blu-ray isn’t particularly special but with a low MSRP, it might be worth checking out.