The Raven has some interesting scenes and features fine performances from John Cusack, Alice Eve and, to a lesser extent, Luke Evans (but mainly because the character merely chases down leads). 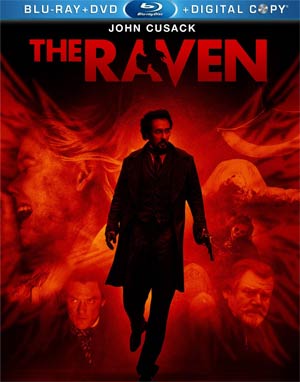 James McTeigue, director of the highly popular but, in my opinion overrated, V for Vendetta and Ninja Assassin (not to mention an uncredited role in the disastrous Invasion production), brings a new spin on the dark Edgar Allan Poe with The Raven. This is a film which tries to capitalize on 18th/19th century mystery genre brought about with Sherlock Holmes, but unlike Guy Ritchie’s ode to slow-mo this is less on style and even fairly thin in substance as well.

The story, set in 1849, follows Edgar Allan Poe (JOHN CUSACK), the famous poet who has returned to Baltimore, basically penniless unable to pay for a drink and is in desperate need for something to get published in the local paper. Poe is an eccentric character who doesn’t have any friends but he is in a secret relationship with one Emily Hamilton (ALICE EVE) but her mogul father (BRENDAN GLEESON), like many others who know Poe, hates the man with a passion and wants him as far away from his daughter as possible. But love conquers all and during one of the few tender moments in the film, Poe proposes marriage to which she accepts.

Meanwhile, not all is quiet in Baltimore when a sadistic Killer has struck killing three women and despite police being at the door, manages to escape without a trace. The case is handled by Detective Fields (LUKE EVANS) and he discovers how the killer eluded police: via a catch release on a window, an element Fields recognizes in one of Poe’s stories. When one of Poe’s chief rivals at the paper is then killed with a swinging blade, also something out of one his stories, Fields calls him in for questioning, although he’s quickly satisfied that Edgar himself is not directly involved with the killings.

If things weren’t already personal, it soon does when the Killer kidnaps Ms. Hamilton and threatens to kill her if Poe and the police don’t follow his orders, including having Poe write a poem about the Killer’s next victims. Now it’s a race against time as the Killer leaves clues to the next victim and the possible Emily’s location.

On the whole, The Raven is an adequately entertaining movie featuring some decent performances, especially from John Cusack and, on a more limited role, Alice Eve as the love interest. I didn’t feel their relationship was as well developed as it could have been but it was good enough to at least be believable why Poe would fight as he did to find and save her. For his part, Luke Evans does well with an underwritten character; he also shows the same charisma which made him standout in The Three Musketeers and Immortals.

When it comes down to it, it’s not a bad film and aptly made from director James McTeigue who stormed the scene with V for Vendetta, under the tutelage of the Wachowski’s. That being said, The Raven isn’t terribly memorable thanks to a bland plot which, by the second half, became more tedious than thrilling.

The Blu-ray comes in a glossy slip cover.

Audio Commentary – The track features Director James McTeigue & Producers Marc D. Evans, Trevor Macy and Aaron Ryder. This is a pretty straightforward commentary where the participants provide information on how the movie was made, background on some of the scenes and where they were shot, and other tidbits.

Deleted & Extended Scenes (10:41; HD) – There are six scenes included and they’re mostly time filler and really don’t add much to the plot.

The Raven Guts: Bringing Death to Life (13:32; HD) is a pretty basic ‘making-of’ featurette filled with behind-the-scenes footage, cast/crew interviews and scenes from the movie. You get some insight into how the movie was made, but it’s still superficial.

The Madness, Misery, and Mystery of Edgar Allan Poe (9:50; HD) – This is a short biography of Poe and his background. It’s actually pretty intriguing and I wish this was a more feature-length documentary…

Behind the Beauty and Horror (2:18; HD) covers the killings based on Poe’s stories in the movie.

The Raven Presents John Cusack and James McTeigue (2:45; HD) – The star and director have a short sit down interview with one another. Like the previous featurette, it’s only a glimpse rather than anything meaningful.

Music for The Raven: The Team (5:10; HD) – This is a behind-the-scenes featurette covering the music/score used in the film.

Previews – House at the End of the Street, Abraham Lincoln: Vampire Hunter

The Raven crows onto Blu-ray with a detail-rich 1080p high-definition transfer. The film, presented in its original 2.40 theatrical widescreen aspect ratio, features fine detail levels from beginning to end while the color array is on the muted side but only because the movie is dark in most scenes, even during daylight shots. It’s never a given that a new release will have a good picture transfer, but this one was fairly impressive.

The 5.1 DTS-HD Master Audio track might not be the most robust lossless track I’ve come across, but it’s still never-the-less a solid track. The dialogue levels come through the center channel while any action elements or Lucas Vidal’s score lifts up the soundtrack for the front and rear speakers.

Overall, The Raven has some interesting scenes and features fine performances from John Cusack, Alice Eve and, to a lesser extent, Luke Evans (but mainly because the character merely chases down leads). However, the movie is also pretty bland in terms of the story. While it starts off well enough, it loses steam by the second half. The Blu-ray itself offers excellent audio and video transfers while the features are on the average side.

2 Responses to “The Raven Blu-ray Review”