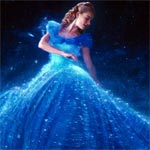 Cinderella wasn’t quite as magical as I’d hoped but there’s plenty elements to admire especially in the costumes and production designs which both I’m certain will receive award recognition in some form. The acting and all around casting itself also isn’t bad with Lily James serving as a great Cinderella and Cate Blanchett serves well as a devilish foe. But for all the good, the story itself doesn’t offer much new or different and the conflict is limited and ineffective.

** Click Here to Purchase Cinderella on Blu-ray from Amazon.com ** Plot Synopsis: For those not in the know the story opens with a brief history of a young Ella whose life is magical with a loving merchant father (BEN CHAPLIN) and mother (HAYLEY ATWELL) but that life is turned upside down when her mother dies of some disease. However, over the course of some odd years, she (now played by LILY JAMES) and her father live a quiet existence turning heartache into memories. When her father meets a recently widowed woman (CATE BLANCHETT) and agrees to marry her and bring into the fold two obnoxious and spoiled daughters, Drisella (SOPHIE MCSHERA) and Anastasia (HOLLIDAY GRAINGER).

Quick Hit Review: I’m going to tell you something that you already know: Hollywood isn’t in the charity business hence why we get remakes, sequels and adaptations and Disney is no worse with their slate that includes Cinderella and in 2017, Beauty and the Beast. With that in mind, I don’t mind some of these moves going after the supposedly safe buck yet you need to offer something more than a safe product. For all the re-imaginations of popular stories, such as A Cinderella Story or Ella Enchanted, they at least were different and provided an interesting vision of a well known and well-told story. This 2015 adaptation, however, is merely a live action version of the animated Disney classic, with a few omissions and tweaks, and frankly, and speaking as someone who isn’t exactly a Disney-fanatic, I found it a tad dull.

Now, technically speaking, is Cinderella a bad film? Not at all, I actually admire the technical work done from the production design, by Oscar winner Dante Ferretti (Hugo, The Aviator) and costumes by Sandy Powell (Shakespeare in Love, The Young Victoria), it’s a great looking adaptation of the Disney animated classic and I know Disney fans will eat every bit of this version up. For myself, as a casual fan, I wasn’t as enamored though director Kenneth Branagh does an admirable job and the acting is fairly well done however I never completely bought into the romance between Cinderella and Prince Charmin as portrayed by Lily James and Richard Madden respectively (obviously). As usual the highlight with these films is the villain and certainly Cate Blanchett as a few great scenes though not sure she was a show stealer compared with even the likes Angelina Jolie in Maleficent (although she technically was the heroine of that film). That said, Blanchett, with James as Cinderella, make the film at least watchable to go along with the aforementioned costumes and set designs.

This release comes with a glossy and semi-reflective slip cover. Inside is a code for the Digital HD copy. This code also works for their Disney Movies Anywhere app where, exclusively, there is 12-minutes worth of Delete Scenes. However, these will not be calculated into the final rating as any features must be present on the disc itself.

A Fairy Tale Comes to Life (9:23; HD) is a relatively short featurette on translating Cinderella into live action form and includes interviews with members of the cast and crew mainly discussing the story and themes.

Costume Test Fun (2:39; HD) – Here we get footage of the various dresses as filmmakers test them to see how they will look on camera. In the process, it would seem the cast was having a good time with the process.

Staging the Ball (11:27; HD) goes behind-the-scenes for one of the central scenes in the movie delving into the production design and costumes.

Alternative Opening: Ella’s Childhood (3:02; HD) is a bit different from the final version with some additional background for Ella but ultimately cut for pacing issues. Included is an intro by Branagh explaining the sequence.

Ella’s Furry Friends (3:43; HD) introduces us to the animals shown throughout the film.

Last item included is the Frozen Fever (7:56; HD) animated short that I believe played before this film in theaters. Disney transforms Cinderella with a 1080p high-definition transfer and shown in its original theatrical 2.40 widescreen aspect ratio. Not too surprising, but the picture quality is nothing short of stunning with incredible colors throughout and excellent detail levels. I may not have been a fan of the movie but Branagh and company really made a good-looking fantasy flick.

The movie comes with a robust 7.1 channel DTS-HD Master Audio track which offers fantastically crisp and clear dialogue throughout while the bulk of the depth comes courtesy of the music and score. Ambient noises and off-screen elements make use of the front and rear channels while the bulk of the audio comes from the center speaker. It’s not the best 7 channel lossless track I’ve come across as the film itself doesn’t lend itself to fully utilizing each one, it’s still as close to the theatrical experience at home. Overall, Cinderella wasn’t quite as magical as I’d hoped but there’s plenty elements to admire especially in the costumes and production designs which both I’m certain will receive award recognition in some form. The acting and all around casting itself also isn’t bad with Lily James serving as a great Cinderella and Cate Blanchett serves well as a devilish foe. But for all the good, the story itself doesn’t offer much new or different and the conflict is limited and ineffective. With all that said, the Blu-ray released by Disney might be limited in the bonus material department but the video/audio transfers are both well done.