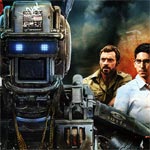 Neil Blomkamp’s Chappie isn’t quite the homerun some expected it to be with a thin story and even thinner characters but like District 9, it impresses in the technical department with excellent motion capturing and all around solid visual effects. The Blu-ray itself has a nice selection of bonus material while the audio/video transfers are both demo worthy.

** Click Here to Purchase Chappie on Blu-ray from Amazon.com ** Director Neil Blomkamp has his share of fans since debuting with the well received, if not heavy-handed, District 9 but since then his sophomore effort Elysium failed to make an impact at the box office (and received lukewarm reviews) and now this junior film, Chappie might just show D9 might’ve been an anomaly, his Sixth Sense if you will. I’ll say up front I wasn’t the biggest fan of District 9, admiring it more for its technical aspects on a such small budget than with its story and its more the same with Chappie, taking place in Johannesburg, South Africa and made on a $39 million budget. However, the plot has much to be desired and the performances aren’t anything exceptional. The story opens in 2016 where Johannesburg has deployed a police force comprised of robots put on the front lines while humans serve as backups. The result of the robots is crime rates are down, foiling and frustrating criminals everywhere. Three such outlaws — Ninja (NINJA), Yolandi (YO-LANDI VISSER) and Yankie/Amerika (JOSE PABLO CANTILLO) — have their latest job thwarted and millions of dollars of drugs ruined/confiscated. Now these Three Stooges are in deep with a criminal drug lord to the tune of 20 million rand (South Africa’s currency) and only have a week to come up with the dough. So, the obvious route is a big heist but need to take into account the robot cops.

The Stooges decide the best option is to kidnap the developer of the ‘bots, Deon Wilson (DEV PATEL), working for Tetravaal who produce and maintain the robots. One such robot is unit 22 which sustained damage after a raid and was set to be destroyed until Deon decided to procure it to test an artificial intelligence program without the permission of the company’s CEO, Michelle Bradley (SIGOURNEY WEAVER). He’s also the target of bullying by a former military turned developer douche named Vincent Moore (HUGH JACKMAN) who has developed his own military robot which more or less looks like the ED-209 from RoboCop. After kidnapping Deon, who already has a robot of his own, he installs the A.I. but like a child, the ‘bot needs to learn like a baby and soon enough he not only has a name, Chappie, but learns some of the group’s bad habits and attitude. But not wanting Chappie to commit crimes, he commands him not to kill or participate in criminal activities, much to the chargrine of the short fused Ninja. Ninja decides to teach Chappie a lesson, throwing him into the real world, the mean streets of Johannesburg where I think we get some sort of homage to Short Circuit 2. Meanwhile, Moore is on to Deon’s secretive activities — I should note despite being bad asses, the Stooges allow Deon to live and return to their hideout — and follows him where he discovers the sentient robot and needs a special key in order to activate Moore’s battle bot. His master plan involves shutting down all of the police robots causing anarchy across the streets so that his version of the ED-209 to take to the streets and clean up, and that also includes taking Deon and the Stooges out.

Chappie on a technical level is nothing short of amazing. The motion capture work done by Sharlto Copley was great, bringing the main character to life and the other visual effects, along with some stunts, were well done. Unfortunately, the other elements from the screenplay to some of the performances and even Neil Blomkamp’s direction weren’t nearly as impressive. The story is rather generic and forgettable until the third act at which point it couldn’t overcome the previous 100 minutes (give or take). The characters, outside maybe Copley’s Chappie, are one-dimensional and in Jackman’s case, stereotypical and almost cartoonish at times. As for Sigourney Weaver, outside of the screen presence she possesses, her character is a non-factor. In no way I’m saying Chappie is a bad film or doesn’t have some entertainment value, but it’s a shallow movie that wanted to be more. It also didn’t help that the tonal shifts were inconsistent and didn’t flow, going from out-and-out action to comedy to drama. As a rental this might be worth it.

This release comes with a matted slip cover. Inside is a DVD Copy and a redemption code for the Digital HD copy.

Featurettes (TRT 1:19:30; HD):
From Tetra Vaal to Chappie (7:30; HD) looks at the creation of the fictional company making robots from its inception dating back to 2003 with a short commercial.

Jozi: Real City and a Sci-Fi Setting (15:03; HD) is a profile of Johannesburg and what it provides to the story.

Chappie: Streetwise Professor (9:31; HD) checks out the language and slang given to Chappie as well as actor Sharlto Copley’s portrayal of the character.

We Are Tetravaal (5:53; HD) covers the fictional weapons company and casting Sigourney Weaver, Dev Patel and Hugh Jackman. * This is the only non-Blu-ray exclusive feature *

Rogue Robot: Deconstruction the Stunts and Special Effects (14:21; HD) breaks down the stunt work and effects with some behind-the-scenes footage, keeping the stunts real as possible.

Arms Race: The Weapons and Robots (6:25; HD) examines the various weapons used throughout the film and how they fit the different characters.

Bringing Chappie to Life: The Visual Effects (8:01; HD) – This is one of the more interesting of these checking out the mo-cap work and integrating it with VFX into the film.

The Reality of Robotics (5:34; HD) is about the real life implications of AI with commentary from experts in the field.

Alternate Ending (5:16; HD) is a bit different extending beyond the original version, to say more would be to spoil the ending… though I kind of liked this better.

Extended Scene: Very Bad Man (1:30; HD) provides some additional, and brutal, footage from one of the scenes. Presented with a 2.40 widescreen aspect ratio and a 1080p high-definition transfer, Chappie looks excellent on Blu-ray. Detail is sharp and colors, although more on the muted side in keeping with the setting is still bright and well balanced. The transfer itself is, of course, clean and free of flaws.

Not too surprising, the 7.1 channel DTS-HD Master Audio track provides one of the better aural experiences this year. The track has wide range from the dialogue which comes through the center channel with clarity while ambient noises, as well as Hans Zimmer’s bombastic (but fantastic) score, help provide excellent depth. The action scenes, and there are a few, give that extra oomph and make use of the LFE channel. Overall, Neil Blomkamp’s Chappie isn’t quite the homerun some expected it to be with a thin story and even thinner characters but like District 9, it impresses in the technical department with excellent motion capturing and all around solid visual effects. The Blu-ray itself has a nice selection of bonus material while the audio/video transfers are both demo worthy.