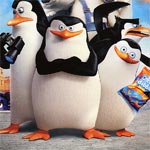 Penguins of Madagascar isn’t a great movie yet highly watchable with plenty of inside jokes the adults will like and yet will still be highly entertaining for the kids. The third act seemed to lose some steam but in the end, I laughed at the jokes and found it to be on par or even better in some instances compared with the Madagascar films.

** Click Here to Purchase Penguins of Madagascar on Blu-ray from Amazon.com ** Those cute, cuddly and conniving penguins introduced as side characters in the Madagascar franchise and got a short-lived television series now get their own spin-off with Penguins of Madagascar and a new globe-trotting adventure.

Skipper (TOM MCGRATH), Kowalski (CHRIS MILLER), Private (CHRISTOPHER KNIGHTS) and Rico (CONRAD VERNON) are being hunted by a mortal enemy, one they didn’t even know about, named Dr. Octavius Brine aka… Dave (JOHN MALKOVICH). Dave is an Octopus who resents the penguins for being so cute and adorable while he is reviled by visitors at each zoo and aquarium he lived at. So now he’s created a ray gun that will turn the penguins, all around the world, into hideous creatures so they may feel the same pain he has. On the hunt for Dave are an undercover organization “The North Wind” led by Classified (BENEDICT CUMBERBATCH) and includes polar bear Corporal (PETER STORMARE), Eva the Owl (ANNET MAHENDRU) and arctic seal and demolitions expert Short Fuse (KEN JEONG). The organization is dismissive of the penguins while Skipper and his crew try to prove their worth, though they do get in the way more than help, especially after Private is captured by Dave.

There really isn’t much to the plot nor there need to be either. One of the special things about the Penguins of Madagascar, other than being one of the brighter spots of the Madagascar movies, is the jokes and the writers lay it on thick early and often to the point where when we get to the third act, it kind of loses some steam, although hardly enough to effect the movie as a whole. The voice casting, predictably, is top notch headlined by John Malkovich who is great as the villain and Benedict Cumberbatch adds to his growing non-“Sherlock” repertoire as quasi-obstacle to the overly confident penguins. And speaking of which, outside of Conrad Vernon replacing John DiMaggio, who probably was busy on the popular Cartoon Network series “Adventure Time,” as Rico, the other three reprise their roles from the Madagascar films and TV show.

In the end, and as far as spin-offs go, Penguins of Madagascar is a fun flick that the entire family will enjoy. Is it still in the second tier of animated movies (below most Pixar films)? Yeah, but that’s not a bad thing and is at least better than any of the Ice Age flicks and has more replay value versus Madagascar: Escape 2 Africa.

This release comes with a semi-glossy slip cover. Inside is a redemption code for the Digital Copy and attached to the box are two wind-up penguin toys.

Top Secret Guide to Becoming an Elite Agent (3:39; HD) is a short featurette made for kids introducing us to the Penguins in action and basically just shows footage from the film.

“He is Dave” Music Video (3:18; HD) is a James Bond-like styling dedicated to the film’s main villain.

Do the Penguin Shake with tWitch (2:26; HD) has the cheorographer showing viewers how to do the “Penguin Shake” as seen in the movie.

Deleted Scene (1:20; HD) – This solo scene, in rough form, is a dream sequence where one penguin dances with his favorite Cheezy Dip snack.

Madagascar Mash-Up (3:12; HD) is a featurette showing footage from their previous appearances.

Rounding things out, there’s a Cheezy Dibbles Ad (0:32; HD), a Gallery of stills from the movie, the Theatrical Trailer (2:25; HD) and The World of DreamWorks Animation which allows you to watch music videos from other DreamWorks films. Unsurprising since it is an animated flick, Penguins of Madagascar looks absolutely fantastic on Blu-ray. Colors are brilliant and bright, detail looks excellent and there are no obvious signs of banding or pixilation making for a dazzling looking 1080p high-definition transfer (MPEG-4 AVC codec).

The movie comes with a 7.1 channel DTS-HD Master Audio track which is fine though a bit overbearing and really doesn’t make use of the 7 channels all that well. The music and score sounds good and dialogue is clear enough but there’s not a lot of depth to this track and that probably goes to the animation meaning any audio had to be artificially recorded. Even so, this is still a nice sounding lossless track. Overall, Penguins of Madagascar isn’t a great movie yet highly watchable with plenty of inside jokes the adults will like and yet will still be highly entertaining for the kids. The third act seemed to lose some steam but in the end, I laughed at the jokes and found it to be on par or even better in some instances compared with the Madagascar films. The Blu-ray released by Fox does offer incredible audio/video but the bonus material is pathetic albeit it is geared toward the younger audience.