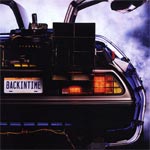 Back in Time and its filmmakers had such a golden opportunity with the number of participants they managed to interview and instead we get an aimless focus on subject with the first half starting off well enough before meandering into the fan aspects and nearly completely ignoring the two sequels. As it stands, it might be worth streaming off of Netflix but nothing more than that.

** Click Here to Purchase Back in Time on Blu-ray from Amazon.com ** Plot Synopsis: The documentary film Back in Time is a look at the very real impact the Back to the Future movies have had on our culture. This documentary shows that what was once a little idea became something truly amazing which resonated through the culture.

Spanning over two years of filming, Back in Time is a cinematic monument to the immensity of the trilogy’s fandom. By capturing countless of hours of footage and interviews, the crew watched as the impact of the trilogy became apparent.

Quick Hit Review: This was perhaps was one of the more disappointing films, documentary or otherwise, that I’ve come across. Despite filmmaker Jason Aron (debut) bringing us new interviews with those involved — including Michael J. Fox, Christopher Lloyd, Lea Thompson, Claudia Wells, Robert Zemeckis, Bob Gale and many others — this felt half complete with the first half covering the first film, how it came to be and its impact followed by quite a chunk on the fandom and in particular, the DeLorean fan base, some minor amount on restoring the original car from its dilapidated state, and showcasing other fan-made car and there’s some coverage for TeamFox, Michael J. Fox’s charity organization which was fine. There’s also some time spent on future technology but it’s skimmed on as was basically the entire third movie. If wanted to know more about the DeLorean, I would wait to watch the documentary, Outatime: Saving the DeLorean set for release in 2016.

Back in Time is a fine time-waster as there were some interesting factoids early on, albeit nothing that probably isn’t already in Wikipedia, but worse of all, it’s very safe. Outside of Dan Harmon (creator of “Community”) stating how, in his opinion, the two sequels sucked, there’s not much honesty, even the recasting of Marty McFly from Eric Stoltz to Fox was handled with kid gloves.

Everything in this documentary has already been told in a variety of interviews and perhaps even expanded if one would look on YouTube, so I’m not sure what there is here to even recommend. At only 95-minutes, it’s not a huge time commitment but considering who they got to interview I expected better and worse yet, far more comprehensive.

Rob Klein’s BTTF Props (3:00; HD) takes a look at this man’s collection and has interview snippets with Fox and Lloyd.

A Vegas Story (3:01; HD) is more footage with the DeLorean fan club.

Fans Talk About the DeLorean (8:38; HD) – If you didn’t get enough of it in the movie, here are some additional interview footage…

More From the Cast (10:15; HD) is some more interviews with the cast including Lloyd, Fox, Thompson and others talking about the characters and other random topics.

Bit BTS (6:38; HD) are some random pieces of footage including behind-the-scenes of interviews as well

Mick Smith (4:33; HD) is an interview with the pyrotechnician on BTTF3. Back in Time is shown with a 1.78 widescreen aspect ratio and a 1080p high-definition transfer. There’s not much to judge as the majority are interviews with footage from the movies thrown in for good measure. Colors are generally fine while detail is standard but adequate enough.

The movie comes with both a 2.0 and 5.1 Dolby Digital tracks and either one is fine. Most of the audio comes out of the center channel with some minor ambient noises as well as the score, make some use of the front speakers otherwise it’s nothing particularly special. Overall, Back in Time and its filmmakers had such a golden opportunity with the number of participants they managed to interview and instead we get an aimless focus on subject with the first half starting off well enough before meandering into the fan aspects and nearly completely ignoring the two sequels. As it stands, it might be worth streaming off of Netflix but nothing more than that. The Blu-ray released by FilmRise has OK video and audio and a half-decent selection of bonus material.