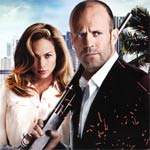 there’s plenty to dislike about Parker from the one-dimensional characters, lame plot and a star that doesn’t seem able to branch out more. Sure, the main character is interesting given he is not the wholesome hero audiences are used to but even then it’s been done before. Since the movie isn’t terribly long, the stunts are fun to watch and help pass the time. The Blu-ray meanwhile offers some OK features while the video/audio transfers are both excellent. Note: This review contains spoilers about the plot; readers beware.

Up front I must admit that I have never read a single novel by Richard Stark and only am familiar with some of the adaptations that have crossed the small and big screen over the years, each carrying a different name of Stark’s most recognizable character. The most well known, at least amongst the Internet community, is the Mel Gibson brutal crime-drama, Payback and its re-cut cousin, Payback: Straight Up, a revenge film where Gibson played a character named “Porter”. Now, however, after numerous adaptations, the character supposedly gets his due in Parker this time with action star Jason Statham taking the role.

The story, based on the novel “Flashfire”, opens with a well planned and elaborate robbery at the Ohio State Fair. Leading the charge is Parker (JASON STATHAM), a disciplined man with a set of principals he lives by (kind of like Dexter if you think about it). His crew, whom he only recently met through his mentor Hurley (NICK NOLTE), who happens to be his girlfriend’s father, brought them together for the score. The cash grab for this job is a cool $1m, split 5 ways makes $200k. After pulling the robbery off, with a big hitch resulting in a set fire in the wrong place, the crew’s usual leader, Melander (MICHAEL CHIKLIS), wants to bring Parker in on a new job worth millions for each member, but he flatly refuses despite more than a few pleads as they also need his cut of the loot for investment into the robbery. After turning down their ultimatum, they draw guns and a shotgun but Parker manages to get the upper hand before jumping out. However, one of the gang, the brother of a mobster, is ordered to finish the job, which he does and kicking Parker into the marsh. Amazingly, Parker is rescued and recovers remarkably well, all things considered, and now is out for revenge.

After robbing a check cashing store for much needed funds, Parker learns that the gang has set up in Palm Beach, Florida for their next heist but upon learning he is still alive, they use their connection to the mob to send a hitman to kill Parker who attempts to kidnap the girlfriend but she manages to escape in the nick of time. With his loved one’s safe, and despite pleads to leave well enough alone by Hurley, Parker goes on his way setting up a false identity as a wealthy Texan looking to buy property as a ruse to find where the gang has set up as the area is well known for being able to be locked down meaning they need to settle and lay low after the robbery.

In Palm Beach we finally meet down-and-almost-out realtor Leslie Rodgers (JENNIFER LOPEZ). Her life is in chaos: divorced at 40, car under repossession and finances are low with shark-like co-worker getting the bulk of the commissions. After snagging said co-worker’s latest contact, she meets Parker going under the name of Daniel Parmitt. At this point, your life will be complete if you’ve ever wanted to hear a Brit speak with a Texan accent. The pair tour available properties eventually coming upon those for $1 million (the amount the gang had from the State Fair robbery) and find one that had recently closed and Parker knows this is likely where the gang is hanging out. He breaks in and gets the lay of the land after which he finds Leslie waiting in his car. She knew there was something off and needing an out of her life, she offers to help in his endeavors. Parker agrees to bring her in only after making sure she wasn’t wearing a wire leading to a gratuitous underwear shot which is as good as it will get from Lopez at this point in her career…

The remainder of the film has Parker dealing with discovering the gang’s plans while also out maneuvering and beating the shit out of the mob hitman while also sustaining injuries that would kill anyone else save for perhaps Jason Bourne and James Bond.

In one of the featurettes for Parker, one of the producers mentions (and I’m paraphrasing) that this role would be something different from action star Jason Statham but for my money, there’s very little difference in any of the other movies where he plays an outlaw with a heart of gold (or at least silver). However, even though this part is just like any he’s played in the past, he does it so well that I don’t mind so long as there’s a plot that makes sense. Interestingly, in the promos I saw on television for Parker, I didn’t even know Jennifer Lopez actually was a co-star… Her role isn’t anything new and kind of reminds me of her earlier parts playing a shyer, down-and-out persona rather than the confident kind in her more recent endeavors. Here she’s adequate but hardly memorable.

The remaining cast are filler parts including Michael Chiklis who gets the thankless task of being the one-dimensional villain and a simple thief at that. He’s certainly a capable actor and has the weight and on-screen clout to at least make a formidable antagonist versus Statham. The others are completely forgettable and are nothing more than punching bags for our anti-hero.

Parker was directed by Taylor Hackford best known for An Officer and a Gentlemen, The Devil’s Advocate and Ray for which he received an Academy Award nomination for Best Director. Again, like the acting, I didn’t see anything new except Hackford keeps the action moving along at a brisk pace.

Feature Commentary – Director Taylor Hackford provides a relatively interesting and informative track sharing anecdotal stories of working with the actors, talking about working at different locations and about the “Parker” novels.

Bringing the Hunter to Life: The Making of Parker (7:28; HD) – This is a relatively simple featurette that chronicles, via cast/crew interviews, the source material, bringing it onto the big screen, casting and filming in the various locations.

The Origin of Parker (4:18; HD) delves into the Parker character, his literary roots and code of honor. ** Blu-ray Exclusive **

Broken Necks and Bloody Knuckles (3:37; HD) – This looks at the stunt work and fights on the project. ** Blu-ray Exclusive **

Who is Parker? (2:32; HD) is a promotional feature to advertise the movie utilizing much of the same sound-bites from the other featurettes. Parker kicks and punches its way onto Blu-ray presented with a finely detailed 1080p high-def transfer. The movie is presented in its original 2.40 widescreen aspect ratio and unsurprisingly the picture is sharp showing very well with close-up objects or people while losing a bit of clarity for things further away. The color array looks well balanced and I didn’t notice any signs of artifacting or pixilation, just some natural film grain.

The 5.1 DTS-HD Master Audio track does a great job delivering the goods from the quieter scenes like dialogue making use of the center channel to the action scenes where gunshots have depth and resonates with the appropriate boom one would expect. The rear speakers don’t get a heavy workout but there’s some good ambient noise, though. Overall, there’s plenty to dislike about Parker from the one-dimensional characters, lame plot and a star that doesn’t seem able to branch out more. Sure, the main character is interesting given he is not the wholesome hero audiences are used to but even then it’s been done before. Since the movie isn’t terribly long, the stunts are fun to watch and help pass the time. The Blu-ray meanwhile offers some OK features while the video/audio transfers are both excellent.