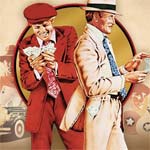 The Sting is a timeless movie one can watch over and over again. The biggest reason for its placement with other classics is mainly due to the fantastic chemistry between Paul Newman and Robert Redford not to mention top notch work on the production design. The Blu-ray offers up solid video and audio transfers which are certainly a step up from the DVD counterpart. 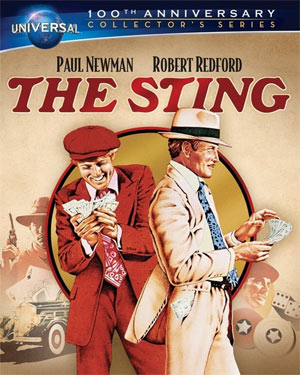 Note: Portions were culled from a 2005 DVD review but has been updated based on my latest viewing and the Blu-ray release.

The confidence sub-genre is probably one of my favorites mainly because you expect twists and more often they don’t feel forced. The 1973 classic, The Sting probably started it all, or reinvigorated it, and went on to win 7 Academy Awards including Best Picture, Best Director for George Roy Hill and Best Score for Marvin Hamlisch who beautifully captures the 1930s era.

The Sting follows small-time grifter Johnny Hooker (ROBERT REDFORD) who does the small con games stealing money here and there with partner Luther (ROBERT EARL JONES, father of James Earl Jones) but after their latest con nabbed thousands of dollars meant for a mob outfit, Luther is murdered sending Hooker on the run avoiding not only the mob, but corrupt police officer, Lt. Wm. Snyder (CHARLES DURNING). Hooker arrives in  Chicago and meets up with Luther’s former contacts, Henry Gondroff (PAUL NEWMAN) wanting to learn more about the trade in order to avenge his friend’s death on crime boss Doyle Lonnegan (ROBERT SHAW), taking as much money as possible from him.

I’ve seen The Sting only two times in my life. I purchased the original fullscreen, watched it and really, really enjoyed it (despite already knowing the “twist” ending). This second viewing was just as enjoyable and what I most appreciated about it is even though there are a few twists and turns, it’s also an easy-going film that you don’t have to think about.

Beyond the story, the set design (taking place in the 30s) is incredible and seems authentic. Also, and more importantly to me, the cast was great. Paul Newman and Robert Redford, who teamed up together in Butch Cassidy and the Sundance Kid, are perfect together (not unlike Walter Matthau and Jack Lemmon)…

And that’s what makes this movie so memorable and such a classic. How many films out there have great scripts? Although they are fewer than the stinkers, there are still a good number of them. But, it’s the actor(s) who fill the roles that make or break a film and when both work on all levels, it’s incredible

If you haven’t seen the film yet and are fortunate enough to not have seen the twist (I found out while watching one of those AFI specials), or even if you know the ending but haven’t seen the entire entity, you are surely missing something special. Now, don’t pop in the Blu-ray or DVD thinking this is a masterpiece in the same vein as The Godfather; it is still a masterpiece on its own level. Masterfully directed by George Roy Hill and written by David S. Ward, The Sting is one of those films that have a high amount of replay value, something that can’t be said with other films with the twist at the end. There’s so much to admire from the chemistry between the leads to the excellent production and costume designs. It’s a timeless movie that only gets better with age.

The “100th Anniversary Collector’s Series” comes in three releases: one in a standard Blu-ray case with slip cover, a standard DVD and the other, as outlined in this review, in Blu-ray digibook format. This comes with a 40+ page book containing bios on the actors and director as well as trivia notes, a portion of the first draft screenplay, photos, etc.

The Art of The Sting (56:19; SD) contains interviews with the cast and crew of the classic film. It is split up into three parts: “A Perfect Script”, “Making a Masterpiece” and “The Legacy”. Each covers certain aspects of the movie and has interviews with Robert Redford, Paul Newman, Charles Durning, Eileen Brennan, Dimitra Arliss and Ray Walston.

Redford and Newman both (their interviews were sadly separate) call back to their time making the film and the pranks played. The other interviewees gush some about director George Roy Hill, his style on dealing with the actors and their hopes he gets the recognition he deserves.

100 Years of Universal: Restoring the Classics (9:13; HD) is a general featurette on how the studio went about preserving and restoring various movies for Universal. While it doesn’t go into detail about The Sting, it’s still interesting to see the process.

100 Years of Universal: The ‘70s (11:01; HD) takes a look at the studio’s hits and notable releases in the 1970s like Animal House, Jaws, The Sting, American Graffiti and others. It features interviews with Steve Spielberg, David S. Ward, Ron Howard, Ivan Reitman, Amy Heckerling, Russell Crowe, Ted Danson and many others.

100 Years of Universal: The Lot (9:25; HD) is a tour of the historic Universal lot and the many classics that were filmed there. This is an extension of the previous featurette and contains more interviews with many of the same interviewees.

Also included on the disc is the Theatrical Trailer (2:13; SD) and a BD-Live portal.

The set also has a standard retail DVD Copy and a Digital Copy download code for iTunes or Windows Media. The Sting arrives on Blu-ray from Universal Studios Home Entertainment presented with a 1.85 widescreen aspect ratio and 1080p high-definition (AVC codec) transfer. It’s not an overly fantastic transfer as it tends to look a bit soft at times, something that was an issue on the Legacy Edition on DVD. The color palette isn’t bad and while it’s something pops off the screen as the tones are more on the natural side, but it still looks good in HD. The picture itself seems to be subduing in terms of noise or film grain so I suspect some DNR was used, though it doesn’t seem to be a noticeable hindrance, though I prefer a more natural approach to these film restorations.

The 5.1 DTS-HD Master Audio similarly is nice though nothing extraordinary. The audio sounds clean displaying none of the characteristics of older films such as spikes or scratchy noises. The dialogue sounds nice and crisp and while a good portion of the action seems to take place through the center channel, some bits of ambient noises or off-camera sounds comes through just fine in the other channels. Overall, The Sting is a timeless movie one can watch over and over again. The biggest reason for its placement with other classics is mainly due to the fantastic chemistry between Paul Newman and Robert Redford not to mention top notch work on the production design. The Blu-ray offers up solid video and audio transfers which are certainly a step up from the DVD counterpart. And even though the features are still lacking, they are at least interesting to watch.