Paramount Home Entertainment has announced the date and released artwork for the action film series, Jack Ryan Collection starring Alec Baldwin, Harrison Ford, Ben Affleck and Chris Pine. Click on the link below or image to the left to check out the features and artwork.

Author Tom Clancy’s renowned CIA analyst returns this August when the new series “Tom Clancy’s Jack Ryan” debuts on Amazon.  In anticipation, fans can catch up on all of the celebrated character’s cinematic exploits when a new 4K Ultra HD/Blu-ray Combo Collection arrives on August 21, 2018 from Paramount Home Media Distribution.

In The Hunt For Red October, the USSR’s best captain (Sean Connery) heads for the U.S. in a technologically advanced submarine. While the American government thinks it’s an attack, a lone CIA analyst (Alec Baldwin) insists the captain is planning to defect.  Both the 4K Ultra HD and Blu-ray Discs include commentary by director John McTiernan and the Blu-ray additionally includes a 29-minute behind-the-scenes look at the film.

Patriot Games finds CIA analyst Jack Ryan (Harrison Ford) thwarting an IRA assassination only to make himself and his family targets of a renegade faction.  The Blu-ray includes a 25-minute exploration of the film.

Harrison Ford returns in Clear and Present Danger as Jack Ryan, who becomes embroiled in an illegal war fought by the U.S. government against a Colombian drug cartel.  The Blu-ray includes a 29-minute behind-the-scenes feature.

Ben Affleck takes on the role of Jack Ryan in The Sum of All Fears.  In this thrilling chapter, Ryan must stop a terrorist plan to provoke a war between the U.S. and Russia.  Both the 4K Ultra HD and Blu-ray Discs include commentary by director Phil Alden Robinson and cinematographer John Lindley, as well as a second commentary by the director and novelist Tom Clancy.  The Blu-ray additionally includes a two-part making-of feature and a five-part exploration of the visual effects.

The origin story of Jack Ryan is explored in Jack Ryan: Shadow Recruit, with Chris Pine taking on the lead role.  As a young covert CIA analyst, Ryan uncovers a Russian terrorist plot to crash the U.S. economy.  The 4K Ultra HD and Blu-ray Discs include commentary by director/actor Kenneth Branagh and producer Lorenzo di Bonaventura.  The Blu-ray also includes multiple featurettes exploring the Jack Ryan character and his enemies, as well as deleted and extended scenes.

With four times the resolution and more than double the number of colors available with full HD, the 4K Ultra HD disc offers the highest quality picture for your home entertainment system.  The 10-disc JACK RYAN COLLECTION will be available at Amazon and Best Buy.  The films will also be available on 4K Ultra HD Digital through select online retailers. 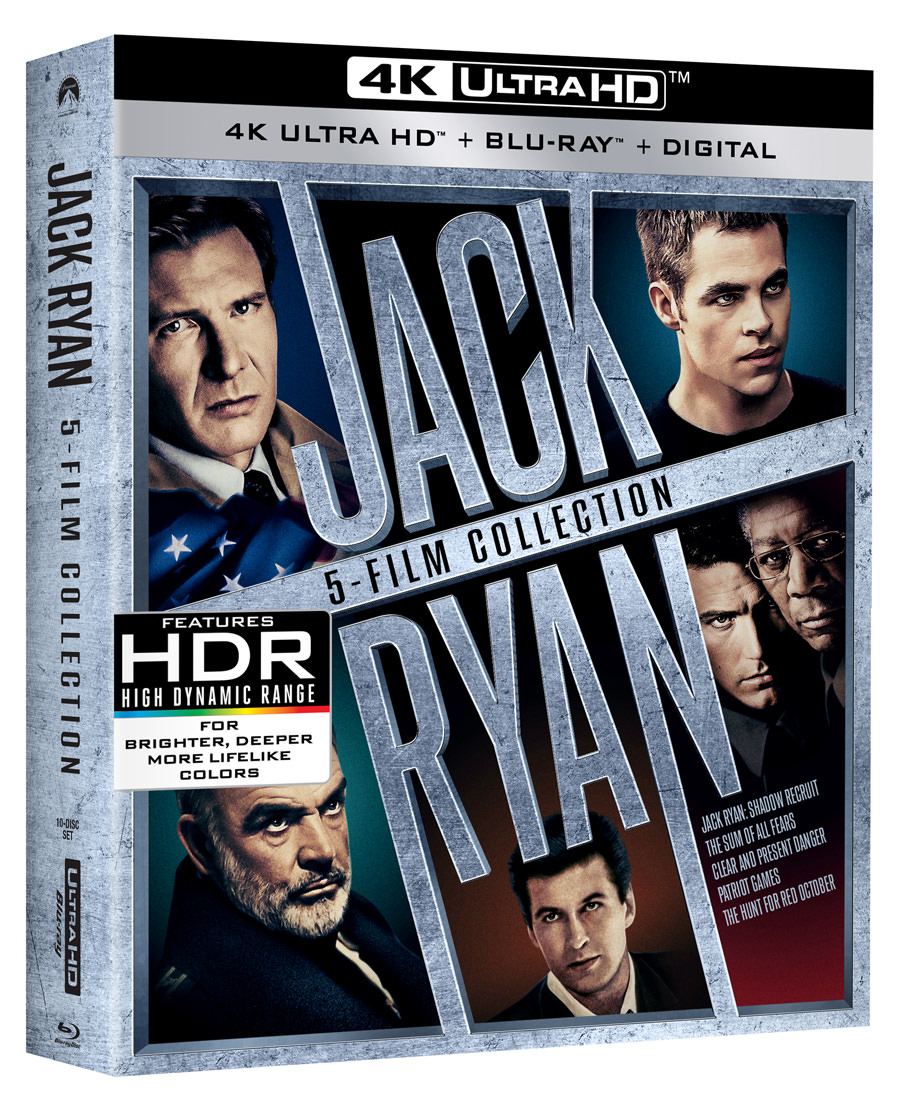