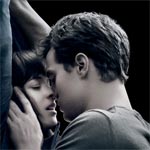 Fifty Shades of Grey is one of the more blasé “controversial” movies, one which doesn’t appeal to anybody, alienating its fans as well as those who have not read the novels. It also doesn’t help that the filmmakers seem to take the material so seriously and have actors read such terrible dialogue. That said, Dakota Johnson is pretty good and the production design and soundtrack are all far better than this material deserves.

** Click Here to Purchase Fifty Shades of Grey on Blu-ray from Amazon.com ** Well, the movie of the year is finally upon arrived with much hype and good disappointment. Yep, last week saw the release of The Avengers: Age of Ultron and while it couldn’t get the opening weekend record, still did pretty damn good at the box office. Yes, I know this is a review for the Fifty Shades of Grey based on a novel originally written as a Twilight fan fiction but talking about anything other than the movie at hand is far more interesting than anything I saw in this film…

Alright, the story centers on a meek young woman named Anastasia Steele aka Ana (DAKOTA JOHNSON) sent by her sick roommate to interview billionaire Christian Grey (JAMIE DORNAN) for the school newspaper. The interview is awkward but there’s an obvious connection between Ana and Christian, well at least the filmmakers want us to think there is. The good: Dakota Johnson is charming as all hell and actually delivers perhaps the only authentic performance in this entire picture; in fairness, someone like Marcia Gary Harden only had two scenes. In the next paragraph I’ll get into the chemistry or lack thereof. Second, this is one slick looking production from the sets to the wardrobe, it all looks sleek to the point I could overlook the obviously fake Seattle skyline in Grey’s apartment. Third, and I might get some guff for this, but I liked the soundtrack and Danny Elfman’s score is low key but well done. That’s it.

Now for the bad: I’ll be brief. The writing is utter crap. Not sure if I can place that much blame on screenwriter Kelly Marcel (Saving Mr. Banks) considering the source material, E.L. James “novel”, probably had some of the worst dialogue ever published and it’s apparent with lines like “Because I’m fifty shades of f***d up” and “You’re here because I’m incapable of leaving you alone” (in real life that translates to stalker, by the way). It’s awful but made worse with the bland and cardboard performance from Jamie Dornan. Perhaps he would’ve made for the poster boy as an image of Christian Grey (though from what I read, fans weren’t enthralled with the choice either) but Dornan just isn’t very good here but in fairness could be a combination of a crap screenplay/adaptation/source material and lack of direction. At the same time, he also had no chemistry with Dakota Johnson which is kind of a problem for a movie built on your two main characters’ romance (and we’ve got two more movies with this loveless couple, yay!).

Fifty Shades of Grey was helmed by Sam Taylor-Johnson whose previous experience has been on short films and biographical dramas including Nowhere Boy and honestly, her direction was OK but nothing special resulting in a film that is at the end, kind of boring and forgettable. For all of the hype and controversy, Fifty Shades is a blasé flick. Absolutely no substance and even with the kinkier sex scenes, and it is fairly explicit, it’s all very ordinary. The acting from Dornan is bad but the writing is even worse. The few saving graces of this film is the production design, soundtrack/score and Dakota Johnson.

Unrated Version (2:08:29; HD) – This cut is about 3-minutes longer but considering I never saw this in theaters, and chose to watch the theatrical version anyway, I can’t entirely what is different but I did check out the biggest difference: is the ending adding some additional footage intermixed with a montage of scenes from the movie. ** Blu-ray Exclusive **

The World of Fifty Shades of Grey is split into three sections which has sub sections and unfortunately no play option is available:

Behind the Shades (19:28; HD) is an over-arching making-of featurette with behind the scenes footage intermixed with interviews by members of the cast and crew including E.L. James, Sam Taylor-Johnson, Dakota Johnson and Jamie Dornan amongst others.

E.L. James and Fifty Shades (5:45; HD) – The author discusses the novel’s success and the adaptation and reception. ** Blu-ray Exclusive **

Music Videos are also included for “I Know You” (5:05; HD) by Skylar Gray and “Earned It (Fifty Shades of Grey)” (4:40; HD) by The Weeknd. Kind of odd they didn’t have Ellie Goulding’s “Love Me Like You Do”, easily the biggest hit on the soundtrack. ** Blu-ray Exclusive ** Fifty Shades of Grey whips onto Blu-ray presented in its original 2.40 widescreen aspect ratio and a 1080p high-definition transfer. The picture looks far too good for this material. Detail levels are sharp throughout and colors tend to be on the, ahem, greyer side but there is some decent pop here and there. It’s also, not surprising, clean free of debris and other ailments though in one transition scene I did notice some minor banding.

The movie comes with a fulfilling 5.1 DTS-HD Master Audio track where dialogue levels sound crisp and clear enough but nothing phenomenal. However, this lossless track provides good depth with Danny Elfman’s score as well as the choice music from the successful soundtrack which puts it into overdrive with the LFE track clicking on. Front and rear channels are mostly reserved for ambient noises. Overall, Fifty Shades of Grey is one of the more blasé “controversial” movies, one which doesn’t appeal to anybody, alienating its fans as well as those who have not read the novels. It also doesn’t help that the filmmakers seem to take the material so seriously and have actors read such terrible dialogue plus Jamie Dornan was so 1-dimensional and is a cardboard cutout playing the title character. That said, Dakota Johnson is pretty good (all things considered) and the production design and soundtrack are all far better than this material deserves.

The Blu-ray released by Universal is pretty basic with so-so bonus material but the audio and video transfers are both well done. However, at best this is a rental as I can’t see what kind of replay value this has.