Begin Again is one enjoyable movie about the music industry without too many inclusionary or referential backgrounds, unlike something like High Fidelity (which is a great movie on its own), and instead is a light-hearted character drama with some catchy songs and actually, Knightley isn’t a half-bad singer. Basically, this is a fun movie that’s neither challenging nor forgettable at the same time. John Carney, writer and director of the critically acclaimed music-drama Once, marks his follow-up with another ode to music with Begin Again which was previously titled “Can a Song Save Your Life?” which is fine though sounds more like a self-help book title than a film. But I digress. This entry into Carney’s relatively young career is one of the more heartfelt films of 2014.

The story centers around a down-and-almost-out music executive named Dan (MARK RUFFALO), forced out of his own indie label company by his co-founder and friend (MOS DEF) and living in a crappy NYC apartment and has a strained relationship with teenage daughter Violet (HAILEE STEINFELD) and contentious one with ex-wife Miriam (CATHERINE KEENER). But his life would change at a cozy coffee house/bar when he sees songwriter Gretta (KEIRA KNIGHTLEY) and using his vision, which he only gets while plastered, sees her with great potential. 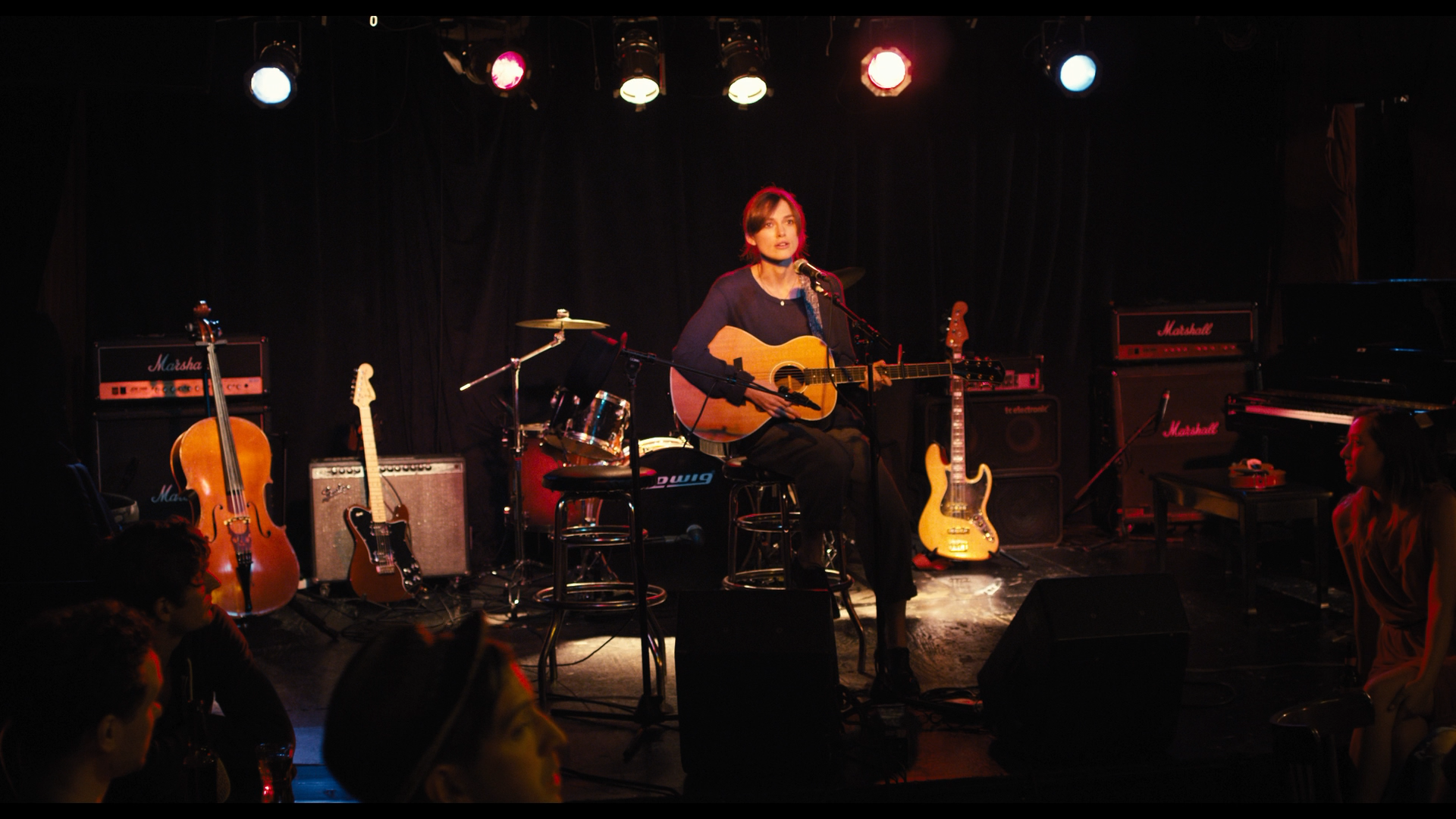 However, Gretta is on her way out of New York City as it unfolds with some slick and cohesive flashbacks. Gretta and her boyfriend Dave Kohl (ADAM LEVINE), and fellow songwriter and singer are flown to the city after Dave’s song, featured on a movie soundtrack, is a hit and his career has taken off at a fast pace. When Gretta discovers Dave’s infidelity, via a song he wrote no less, she moves in with her best friend Steve (JAMES CONDEN) and soon enough her own life changes upon meeting Dan.

Together, Dan and Gretta set out with an ambitious plan: record each track of an album in and around the city. They gather some of the best around from a cellist, violinist and pianist and soon enough are making sweet, as well as catchy, music together and help one another’s personal lives in the process such as Dan’s relationship with his daughter.

But the true star of Begin Again is the music, and in particular the love of music, from the pop-esque variety to more classic songs. It’s also, albeit played up as a C-plot, the changing of the music industry itself with teams of consultants. The acting is also one of the highlights. Mark Ruffalo and Keira Knightley are fantastic together to go along with Hailee Stanfield and Catherine Keener (whom I wish was in it more). Now, there is CeeLo Green but thankfully he’s basically playing himself and Adam Levine… is thankfully isn’t in a whole lot of the film and, like Green, just plays a pop/rock star.

What I particularly enjoyed about Begin Again is its unreserved simplicity. This is not a complicated, overly dramatic plotline and for once we have two leads whose relationship is more or less platonic and not much of a romance between the pair is even hinted at. Also absent is the third act fight/break-up; it’s refreshing to see something different in terms of the plot structure which, early on, does a good job taking us back and providing much needed background on the cashiers. This is the ultimate sit back, relax and smile kind of flick.

The Blu-ray is unfortunately a bit sparse. There’s a The Making of Begin Again (20:53; HD) featurette providing some behind-the-scenes footage and on-set interviews, some Music Videos (14:39; HD) for: “Lost Stars” by Adam Levine, “Lost Stars” by Keira Knightley, “Tell Me If You Wanna Go Home” and “Like a Fool” by Knightley. Also included is a redemption code for the Digital Copy. Begin Again hits the right beat, babadum, on Blu-ray presented in its original theatrical 1.85 widescreen aspect ratio and a 1080p high-definition transfer. In keeping with the film’s tone, most scenes are warm although skin tones and other elements appear to be natural. Detail levels aren’t bad with close-ups being sharp while background objects tend to be softer. It’s a good transfer, just nothing especially noteworthy.

There aren’t many dramas that benefit from a lossless track, but this one with its plethora of new and old music helps give this 5.1 DTS-HD Master track depth. Dialogue levels of course are crisp and clean and the streets and sounds of NYC come to life with ambience making use of the rear channels. 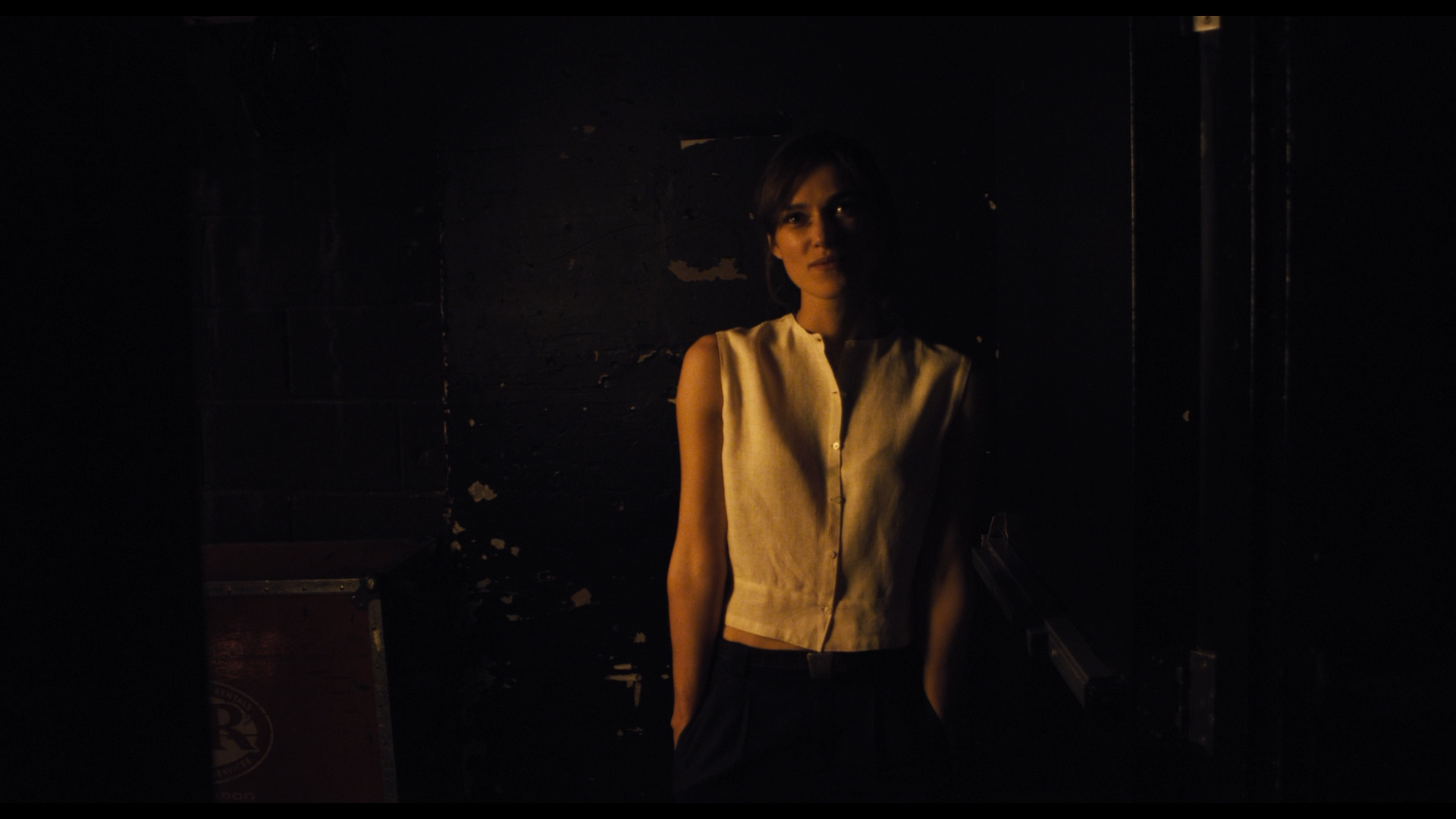 Overall, Begin Again is one enjoyable movie about the music industry without too many inclusionary or referential backgrounds, unlike something like High Fidelity (which is a great movie on its own), and instead is a light-hearted character drama with some catchy songs and actually, Knightley isn’t a half-bad singer. Basically, this is a fun movie that’s neither challenging nor forgettable at the same time. The Blu-ray released by Anchor Bay offers up good video, excellent audio however minimal amount of bonus materials. If you love music or this cast, this is easily a day one purchase.