The Shadow had plenty of potential but thanks to budgetary constraints and a screenplay that probably could’ve used a polish, that’s all this film is left with. But now 20 years later, it receives new life on Blu-ray to the point hopefully it finds a new audience and Hollywood takes another stab considering the advancement in visual effects with value to the dollar. “Who knows what evil lurks in the hearts of men?”

The 1990s was certainly an interesting era for studio-financed films, especially fantasy and/or comic book oriented. In 1992 you had the dark and disturbing Batman Returns which made coin but turned off families and Batman Forever three years later (1995) was more family-friendly but led into the god-awful Batman & Robin. Beyond that, it also was a time of transition from traditional filmmaking and using practical techniques to the new world of CGI pioneered, in part, by Steven Spielberg’s Jurassic Park in 1993. Of course, this new world came at a hefty cost which, over the years and for better or worse, has considerably cheapened. 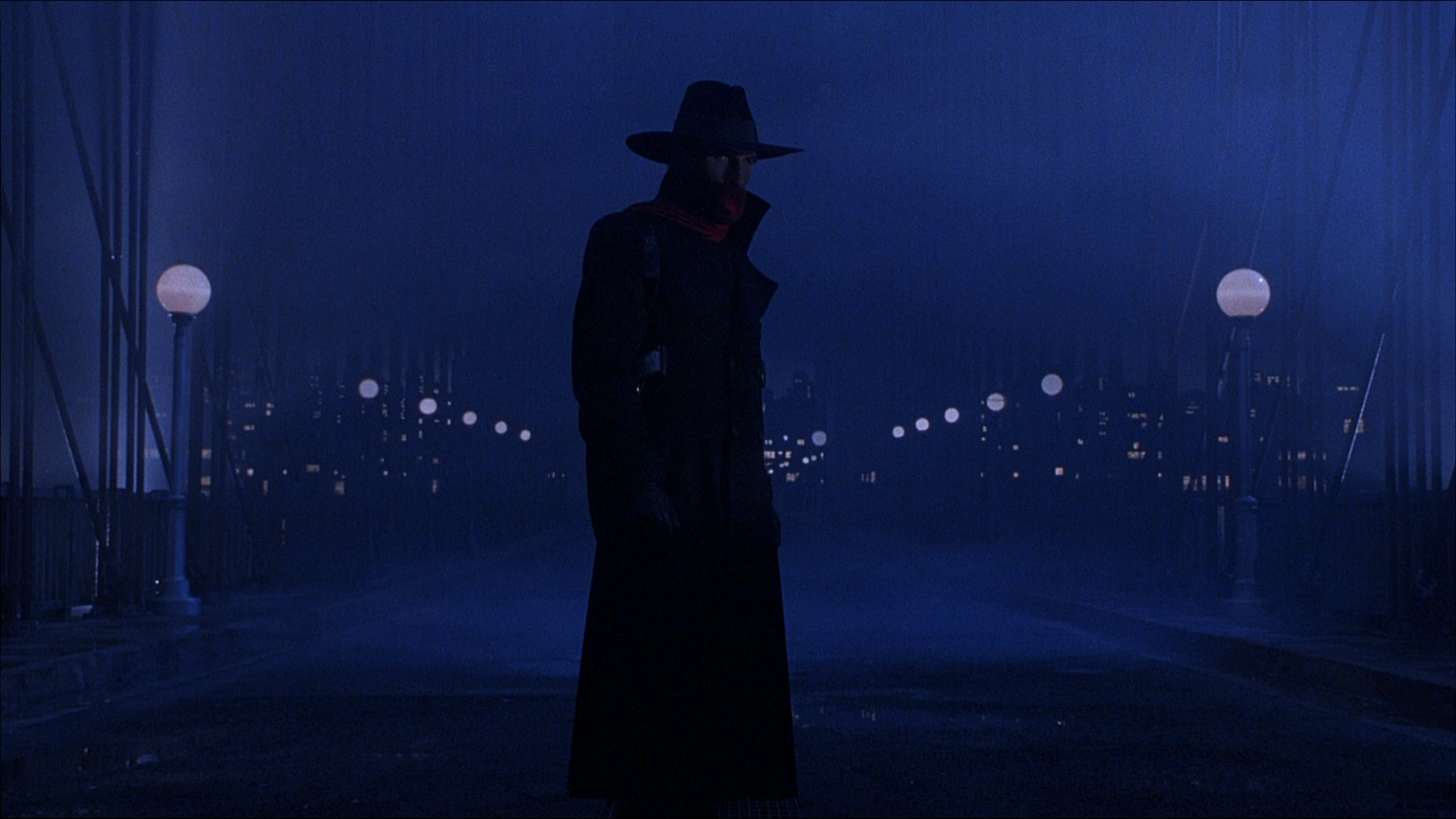 In 1994 Universal released a $25 milllion budgeted adaptation of the classic 1930s radio program, The Shadow featuring a fine casting crop including Alec Baldwin during his heyday of theatrical films and the lovely Penelope Ann Miller; and some decent talent behind the camera from director Russell Mulcahy (Highlander I & II), Screenwriter David Koepp (Spider-Man, Jack Ryan: Shadow Recruit) and cinematographer Stephen H. Burum (Carlito’s Way, The Untouchables).

However, the sum of these parts does not make for a good movie. Sure, there are moments I liked and some of the character choices were unique such as making our hero a complete evil villain at the beginning, but the film itself does tend to lag despite gorgeous production design and a running time that was relatively short. Also, and this is no doubt attributed to budget issues, but the finale felt like a big letdown not to mention the effects, even for the time, looked hokey. Underneath it all, there probably was a good movie with The Shadow and the ideas were interesting to the point I liked the character enough that hopefully somebody, with talent, gives the character another shot. 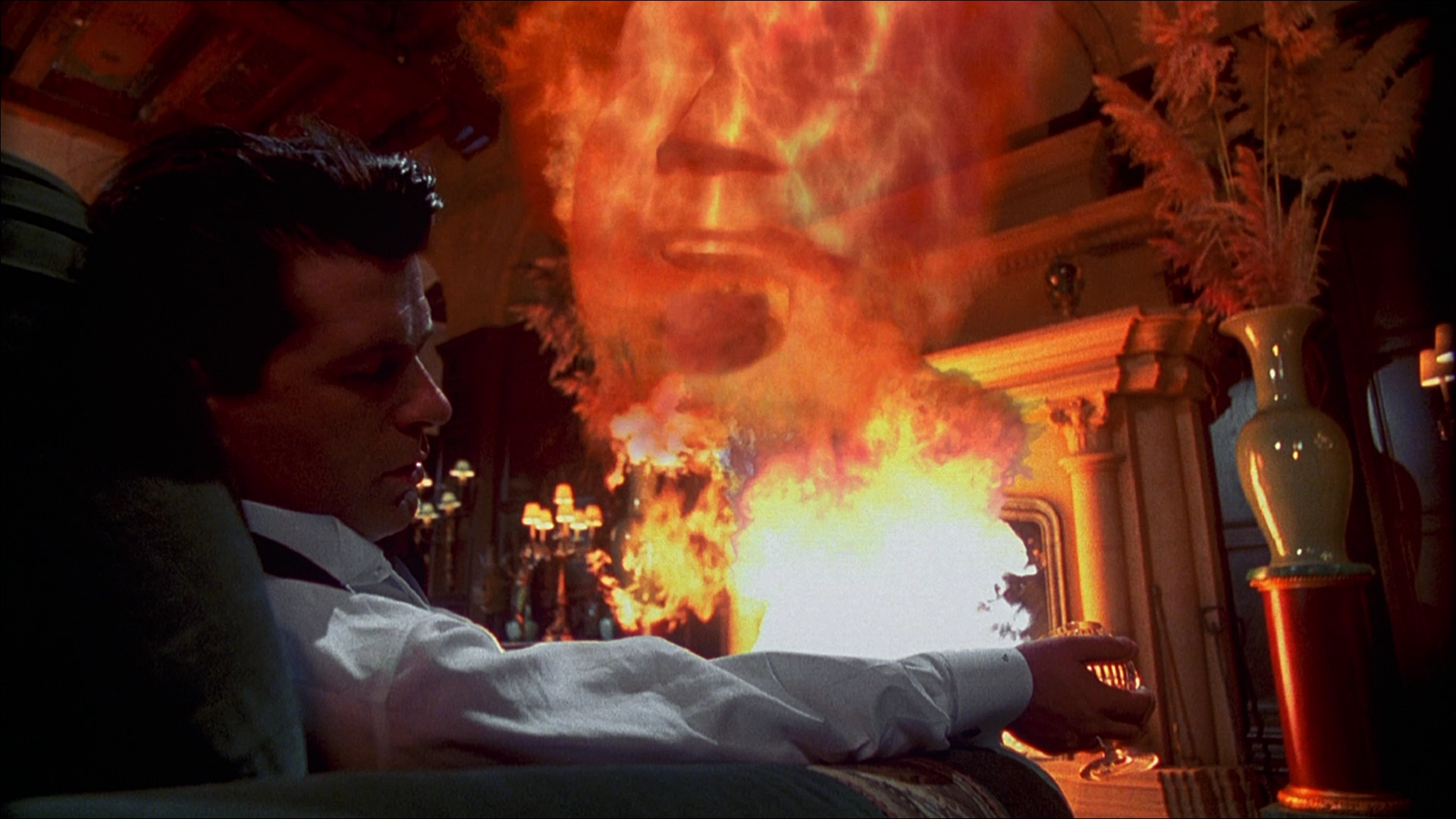 For their parts, Alec Baldwin embodies the main character quite well and Penelope Ann Miller, even with the all-too-convenient telepathic ability, shares some solid chemistry with one another. No, neither one of them is that memorable but they fill out the necessary roles well enough.

Well, it might not sound like a lot, but considering Universal’s release failed to bring any features, hard for me to complain too much.

Looking Back at The Shadow (23:44; HD) is a relatively in-depth featurette containing new interviews with many of those involved including director Russell Mulcahy, Actors Alec Baldwin and Penelope Ann Miller, Screenwriter David Koepp, Production Designer Joseph Nemer III and Director of Photographer Stephen H. Burum. It’s finely put together as each recalls their time working on the film and with one another.

The Theatrical Trailer (1:57; HD) and a Stills Gallery is also included. Ok, save for the features, this is where the rubber meets the road. The first thing I did notice that despite the back cover stating it is the original 1.85 aspect ratio, this new transfer (and it is new) from Shout Factory does open up the matting to 1.78 which isn’t overly surprising and something Warner and Paramount does on a consistent basis (and you’re not missing anything). The second item I noticed was with the title. Where the Universal version had the green tint seen on the cover, this one, which is zoomed in due to presumably the odd AR the title sequence had, is a cool light blue instead. I don’t know if this was how it was originally done (doubtful as I can’t think Universal would bother altering it for their release and, let’s face it, they did little else to help that transfer) or if somebody messed up… or it was done on purpose. Whatever the reason, it was a bit disconcerting to see it done and made me pay even closer attention to the rest of the transfer.

So, how does this new transfer look? Well, doing a direct comparison with Universal’s disastrous version, it is a bit better. Gone is the splotchy noise and over-sharpening. Colors still aren’t terribly vibrant but it’s still fairly good and Shout’s transfer does seem to be free of any obvious scratch marks.

Also different from the Universal version, this is a new 5.1 DTS-HD Master Audio mix. Having been able to compare back-to-back, the differences are kind of negligible, but I did notice that this one maybe has a bit more depth in the rear channels especially when it comes to Jerry Goldsmith’s booming score. Outside of that, the bulk of the action takes place through the center channel where, for dialogue, sounds crisp and clear.

Overall, The Shadow had plenty of potential but thanks to budgetary constraints and a screenplay that probably could’ve used a polish, that’s all this film is left with. But now 20 years later, it receives new life on Blu-ray to the point hopefully it finds a new audience and Hollywood takes another stab considering the advancement in visual effects with value to the dollar. The “Collector’s Edition” Blu-ray released by Shout Factory at least does finally give us features and the audio and video transfers correct many of the problems that plagued the Universal release.