The Heat is a fun little twist on the buddy cop comedy and even though it doesn’t nearly measure up to Lethal Weapon both in terms of chemistry or the plot and villain, there’s just enough here to make it worthwhile. Both Sandra Bullock and Melissa McCarthy are wonderful together and McCarthy uses every opportunity to showcase her comedic talents, albeit at the expense of a coherent or merely serviceable plot. But I had fun with it and laughed at the right moments. 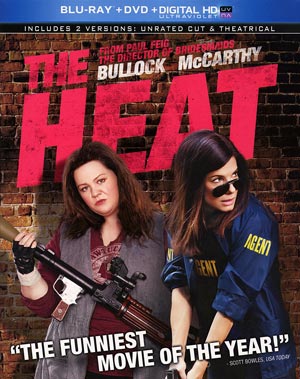 A massive summer hit, mainly due to Melissa McCarthy’s continued success following Bridesmaids, The Heat doesn’t really break too much ground with the buddy comedy outside of switching genders. It’s pretty generic but the two leads, like Gibson and Glover before them, really lifts it up.

The plot involves FBI Special Agent Sarah Ashburn (SANDRA BULLOCK), a smug woman who isn’t well liked in the office for showing off at busts and much like the other roles Bullock has played – everything from The Net to Miss Congeniality – is a loner not having any friends and is particular in her habits. Ashburn receives an assignment by her boss (DEMIAN BICHIR) to go to Boston, locate and take down a drug lord known only as Larkin.

Once in Boston, Ashburn disgruntling teams up with fouled-mouth Detective Shannon Mullins (MELISSA MCCARTHY) due to her knowledge of the players and area. Mullins is more or less a bull in a China shop not playing nice, even with her captain (TOM WILSON). Of course, as in any buddy cop movie, the two do not get along with one another. But throughout the film they learn a bit about one another including that Mullins’ brother, Jason, (MICHAEL RAPPAPORT) is not only in jail, about to be released, but she was the one to put him there leaving angst amongst her family.

Ashburn and Mullins make their way through leads in a mish-mash of scenes that served only to show off the comedic skills of the two ladies and attempt to sex-up Bullock during a scene at a dance club where the club owner has ties with Larkin. This also leads to a couple side characters in two DEA Agents (DAN BAKKEDAHL, TARAN KILLAM) who are also investigating Larkin and taking down his drug empire.

The remainder of this “plot” seems to meander and subsequent scenes serve only to showcase McCarthy and Bullock’s comedic skills before going back to the well with genre clichés (i.e. our two new friends have a falling out before reconciling in the nick of time).

It should be noted, The Heat is a tough movie to get through if you’re not a fan of Melissa McCarthy. Although Bullock is the star, her character has been seen numerous times before and it’s merely a character whereas McCarthy, like Chris Farley before her, seems to use her newfound fame as standup routines. That being said, I do like her and often find her obnoxious demeanor to be very, very funny and she works well off of Bullock’s straight-lace nature.

The film was helmed by Paul Feig, a funny guy on his own if you’ve ever seen him, who is finding fame along with McCarthy thanks to Bridesmaids’ breakout at the box office. Kind of similar to Judd Apatow, in terms of their comedy style of direction, Feig shows some great timing and really makes something generic and forgettable into comedy gold… of course, having a new talent does help.

In the end, I don’t think The Heat is a great comedy and the plot is awfully thin, but the pairing of Sandra Bullock and Melissa McCarthy makes it stand out from the pretenders. No, I highly doubt we’ll look back on this like Lethal Weapon or even 48 HRS but it serves its purpose with some fun laughs and a unique sense of humor.

This release comes with a glossy slip cover. Inside the case is a standard DVD Copy disc using it to get the regular Digital Copy or a download code for the Digital HD via UltraViolet.

Unrated Cut (2:00:20; HD) – Having watched the theatrical version only, not entirely sure what’s new but considering it’s only 3-minutes longer, it’s probably just insignificant scenes. I will update this once I do watch this version.

Of these, three or completely useless and more gimmicks (3 and 4), #1 has Fieg offering some decent BTS information, #2 isn’t quite a madhouse and it is coherent enough and #5 is fun particularly for fans of the trio.

So all told, there is over 54-minutes worth of material, not even sure those line-o-ramas on Universal’s releases reach that number…

All the Stuff We Had to Take Out But Still Think is Funny:
Deleted Scenes (10:12; HD) contains 11 scenes that were ultimately excised.

How The Heat Was Made (19:44; HD) is an actual on-set featurette providing behind-the-scenes footage and on-set interviews with the cast and crew.

Live Extras – A feature I am unable to access as it is “not supported in” my country (i.e. the United States). But looking at the menu, it’s just promos for other titles.

Previews – The Internship, The Way Way Back

Fox releases The Heat on Blu-ray presented in its original 2.40 theatrical aspect ratio and a 1080p high-definition transfer. The picture has a warm vibe to it with tones more in the orange and other tepid colors, even so, the detail levels are excellent and the dark scenes, the few anyway, don’t show off any signs of artifacting or pixilation. Like other transfers by Fox, there is some natural grain but it’s nothing overpowering or distracting.

The disc has been given a lively 5.1 DTS-HD Master Audio track and even though this is primarily a comedy, the audio does sound nice and clear throughout. The dialogue levels are crisp and when there are action scenes, there is some depth to the track, though it’s minor. I doubt anyone would pop this in to show off their system, it’s still a solid track.

Overall, The Heat is a fun little twist on the buddy cop comedy and even though it doesn’t nearly measure up to Lethal Weapon both in terms of chemistry or the plot and villain, there’s just enough here to make it worthwhile. Both Sandra Bullock and Melissa McCarthy are wonderful together and McCarthy uses every opportunity to showcase her comedic talents, albeit at the expense of a coherent or merely serviceable plot. But I had fun with it and laughed at the right moments and even with the clichés, managed to get through it without rolling my eyes. The Blu-ray released by Fox is pretty stacked headlined by 5 commentary tracks with 3 of them being worth a darn plus nearly an hour’s worth of alternate takes.