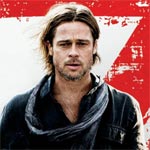 World War Z isn’t a bad movie, far from it, as it efficiently entertains from beginning to end though Brad Pitt more or less sleepwalks through his role. However, this film is the epitome of wasted opportunities as this could have been one of the best in the genre to come out but instead it’s just a safe movie with nothing discernibly memorable. The Blu-ray combo set released by Paramount provides excellent audio/video transfers but the features leave much to be desired. World War Z is a rare breed of film, one where the behind-the-scenes is probably more interesting than the film itself. Like Lost in La Mancha, which chronicled the failure and troubled production of Terry Gilliam’s The Man Who Killed Don Quixote, and the Daniel Craig/Naomi Watts/Rachel Weisz starrer Dream House, WWZ infamously went way over budget (>$200M), scrapping and reshooting nearly half of the film. However, thanks in part to the popularity of the novel to which its based and Brad Pitt’s star power, the film went on to garner positive reviews and over $500M worldwide in box office receipts.

Gerry Lane (BRAD PITT) is a family man with a loving wife, Karin (MIREILLE ENOS), and two ridiculously cute kids that seemingly only exist in movies. One morning as this picture-perfect family gets ready for the day, all hell breaks loose in Philly as a epidemic rabies-esque disease spreads turning formerly living people into, for the lack of a better word, walking dead. Each person who gets infected becomes one and it’s spreading across continents infecting billions. On their way out of town, the Lane family becomes trapped in the middle of the latest round of infections and run for their lives, gathering supplies along the way. Gerry, being a former United Nations investigator, he uses his contact within the government to extract he and his kids, though they have to lay low until the morning. As the zombies give chase, the Lane’s find a family who invites them into their apartment and come morning, they go to the roof and receive an extraction on a helicopter. Although hardly the most suspense-filled sequence, it is one of the highlights of the first half of the film… This part also is one of the more interesting aspects of the plot retooling as the chopper pilot is played by Matthew Fox (“Lost”) but his character was all but removed.

The Lanes are taken to an aircraft carrier and given accommodations… but only if Gerry agrees to accompany a scientist to South Korea where they believe the outbreak originated. Having no choice, Gerry leaves his family behind and goes with a few special forces-like men and the scientist. The reason I’m not bothering naming said scientist is because he dies shortly thereafter. How you might ask? No, he doesn’t become a zombie but instead, during a downpour on the tarmac, he slips and cracks his head. Gerry might’ve been a badass but his one charge dies within minutes of landing? Yeah, big time fail there.

After interviewing a former CIA agent turned traitor (DAVID MORSE), who reveals that Jerusalem had built up their walls to protect itself just days before the outbreak, Gerry’s investigation takes him to Israel. If you’ve seen any of the trailers, you know what happens next as the zombies breach over the top but in doing so, Gerry discovers what makes them tick and their weakness. Teaming up with an Israeli soldier (DANIELLA KERTESZ), whom Gerry saved from getting infected, they race against time to find a cure before the entire world is devoured.

As I said in my opening, the real spectacle of World War Z happened behind the camera when Forster and/or the studio tossed nearly half the movie and did some expensive reshoots and the result was… an adequately entertaining flick. Nothing more and nothing less; not bad, not great, it’s just… there. The “Unrated” cut runs about two hours and moves at a brisk pace. As for the differences, you do get a bit more gore so at least there it does have a one up on the theatrical version.

As for the movie itself, I can’t quite say there’s anything that stands out. Before the film’s release, I did find it strange to see Brad Pitt even star in a zombie flick but he, and his stubble, does a fair job in what’s a thankless and woefully underwritten role of a man who runs/flies around the world. Still not sure why his character was the chosen one to even find the cure other than the role was played by Pitt. Even so, just his on-screen presence brings an instant sort of charisma so I can at least half buy his skills and the ability to get out of harrowing situations (culminated by a plane crash). Another positive point for the film is the direction by Marc Forster coming off of Quantum of Solace – a film marred more for the script in my opinion – and Machine Gun Preacher, a fine spiritual drama. World War Z moves from one scene to the next at an efficient pace and although it doesn’t have the complexities of the novel, delving into class warfare, under Forster the film still manages to be somewhat entertaining and overcome any flaws with that story. Forster does utilize some cool camera angles bringing a real-world effect and ratcheting up the tension when necessary.

On the whole, World War Z might be a film of lost opportunities and indeed the script could’ve used some polishing but by the same token, and acknowledging it doesn’t exactly break new ground in the zombie subgenre, the film is at least entertaining and fit for mainstream viewing which I realize is not a good thing for the hardcore fans, a good number who are probably avid readers of the novel.

This release comes with a matted, title-embossed slip cover. Inside is a standard DVD Copy and a download code for both the UltraViolet and regular Digital Copy.

Included in this set is an Unrated Cut. The theatrical version is only available on the 3D Blu-ray, DVD and Digital Copy.

The features are pretty sparse with only three featurettes:

Origins (8:21; HD) looks at how the project got off the ground from the book rights, getting the screenplay, casting and filming. It’s pretty brief and light in real information.

Looking to Science (7:28; HD) examines how zombie-ism could be grounded in science and the overall history behind zombies.

WWZ: Production (36:18; HD) is the meatiest of the features broken up into four-parts and giving a deeper looks into the production of the film and has some of your usual sound bites from the cast and crew explaining the basic premise. The behind-the-scenes elements were fairly interesting. World War Z lumbers onto Blu-ray with a nice 1080p high-def transfer presented in its original 2.40 widescreen aspect ratio. The detail levels are excellent with fine point sharpness and while the picture is clean, there is some normal grain which is kept to a minimum. The colors are also well balanced.

The disc includes a semi-aggressive 7.1 DTS-HD Master Audio track showcasing a wide range from the more low key dialogue coming from the center speaker to the more action-oriented scenes which shows off the front and rear channels. It’s not the most extraordinary lossless track that I’ve come across; nonetheless it is impressive enough giving an excellent theatrical experience at home. Overall, World War Z isn’t a bad movie, far from it, as it efficiently entertains from beginning to end though Brad Pitt more or less sleepwalks through his role. However, this film is the epitome of wasted opportunities as this could have been one of the best in the genre to come out but instead it’s just a safe movie with nothing discernibly memorable. The Blu-ray combo set released by Paramount provides excellent audio/video transfers but the features leave much to be desired.