“Person of Interest”: The Complete Second Season continues its upward trajectory from its inaugural season. The storylines are richer and more connected; the new supporting characters are great additions with two getting recurring main roles next year. 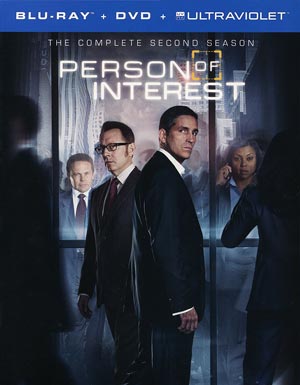 The Jonathan Nolan created thriller, “Person of Interest”, enters its second season following the finale where pseudo-psychopath named Root (AMY ACKER, who has signed on as a series regular for season 3) has kidnapped Finch (MICHAEL EMERSON) and concludes in a two part episode ‘The Contingency’ and ‘Bad Code’, as the two go cross country with Root on a person vendetta. She also reveals her true intentions with Finch: to find the Machine and set it free.

Meanwhile, being the loyal person he is, Reese (JAMES CAVIEZEL) attempts to find Finch but the Machine will not help and only spits out another number to rescue a shady accountant named Leon Tao (KEN LEUNG who makes multiple appearances). As he deals with Leon, he has Detective Carter (TARAJI P. HENSON) dig up any info she can on Root. The second episode, ‘Bad Code’, has Reese and Carter team-up following a trail for Root to Texas where they discover her true identity and thus also rescue Finch. It’s a good two-part episode though by comparison with the rest of the season, underwhelming…

Detectives Carter and partner Fusco (KEVIN CHAPMAN) get their own little storylines throughout this season as well. For Carter, she gets in a relationship with narcotics cop Cal Beecher (STERLING K. BROWN) who may or may not be on the take while Fusco’s past comes back to bite him and deals directly with an organization known as “HR” (aka Human Resources) and are a group of corrupt cops who was infiltrated and taken down by the FBI and were all but decimated though they still have influence which is far reaching with deadly consequences throughout the season.

Also getting introduced, in one of the highlight of the second season in ‘Relevant’ is operative Samantha Shaw (SARAH SHAHI also will be a main cast member in season 3) who, along with her partner, was on the other end of the Machine’s numbers and dealt with the relevant numbers pertaining to impending acts of terrorism around the world. But when she is set up by her handler and Special Counsel (JAY O. SANDERS), her partner is killed and she’s on a vendetta for revenge and, at least at first, refuses help from Finch and Reese who were on her trail due to her irrelevant number coming. The introduction episode itself was cool as it almost entirely takes place with her POV and almost could be considered a backdoor pilot which, if successful for season three, we could see a “POI” spinoff. While I know some fans don’t care too much for the character, and/or the actress, I love the addition and absolutely adore Shahi, whom I first saw, along with most others, on the now defunct series, “Fairly Legal.”

What’s most intriguing about “Person of Interest” is how the writers, including creator Jonathan Nolan (The Dark Knight trilogy) who scripts several episodes, are able to mesh season-long, or mutli-episode storylines with standalone, procedural elements. It’s nearly flawless and often times the theme of the episode lends to a look back at Finch’s past such as an episode where business partners have a falling out. It’s a good way at moving the story forward yet still giving bits and pieces to Finch’s mysterious past, which becomes clearer at the end in a heartbreaking scene wonderfully performed by Emerson.

“Person of Interest” season 2 is a good step up from its already solid inaugural season and while this year was great, I feel it still has not reached the ceiling which leads to hope the third season can at least match it.

This 10-disc set (4 Blu-rays and 6 DVDs) is contained in an extra-wide HD Keep Case which slides into a matted slip cover. The inner artwork is different from the outside. Inside is a download code for the UltraViolet Digital Copy.

All the features are contained on the fourth disc.

View from the Machine: 24 Hours Behind “Person of Interest” (21:24; HD) offers a glimpse at how episodes of the show are made from the writers, filming and editing, from both coasts, some of it done through the Machine’s eyes. It’s nothing spectacular especially considering this is the only featurette, but it’s interesting nonetheless.

“Person of Interest”: The Complete Second Season arrives on Blu-ray presented in its original 1.78 widescreen aspect ratio, looks wonderful in high-definition though more or less matching the 1080i video on TV. The colors are well balanced lending more towards darker elements like clothing or nighttime shots, none of which show signs of artifacting or other anomalies. The detail levels are good showing every hair or spot on close-ups while the more distant parts to become somewhat degraded in clarity. Still, it’s a good and impressive transfer.

The discs come with a 5.1 DTS-HD Master Audio track which is fine however nothing particularly special. The dialogue levels, making the most use out of the center channel, are crisp and clean but the track does kind of fall apart with some of the more action sequences which don’t sound great though it is more than adequate.

Overall, “Person of Interest”: The Complete Second Season continues its upward trajectory from its inaugural season. The storylines are richer and more connected; the new supporting characters are great additions with two getting recurring main roles next year. The Blu-ray released by Warner Home Video offers solid video/audio transfers while the features are limited but what’s there isn’t half bad. The only drawback is the price but if you love the show, maybe it’s worth it otherwise, and if you’re patient, wait a bit and it should go on sale in the $20 range.