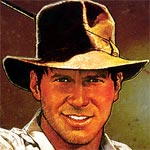 The Indiana Jones: The Complete Adventures is a great set for fans of the franchise. Each of the film’s 1080p HD transfer is amazing to go along with the lossless DTS-HD Master Audio tracks. The only drawback is that features from the previous releases, including Kingdom of the Crystal Skull were not ported over. 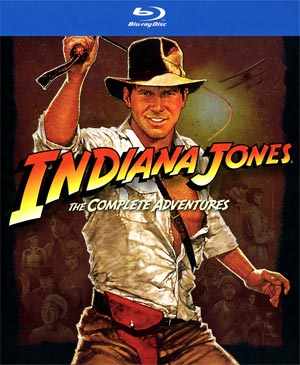 Indy (HARRISON FORD) and his feisty ex-flame Marion Ravenwood (KAREN ALLEN) dodge booby-traps, fight Nazis and stare down snakes in their incredible worldwide quest for the mystical Ark of the Covenant. Indy, his sidekick Short Round (KE HUY QUAN), and nightclub singer Willie Scott (KATE CAPSHAW) go from high-flying action above the Himalayas to a nail-biting runaway mine car chase and finally a spine-tingling escape from a fortress-like mine in India. Indy’s Nazi enemies are back and have kidnapped his father, Professor Henry Jones Sr. (SEAN CONNERY), to get help in their search for the Holy Grail. Following a trail from America to Venice to the deserts of the Middle East, it’s up to Indy to save his father, save the Grail and save the day. The latest outing finds Indy trying to outrace a brilliant and beautiful agent (CATE BLANCHETT) for the mystical, all-powerful crystal skull of Akator. Teaming up with a rebellious young biker (SHIA LABEOUF) and his spirited original love Marion (KAREN ALLEN), Indy takes you on an action-packed adventure.

This Blu-ray comes housed in a book-style case with each of the 5 discs in side slits which are easy to remove and place back. The book is in turn housed in a sturdy outer case.

Bonus Disc:
On Set with Raiders of the Lost Ark (57:53) is a 2-part featurette – “From Jungle to Desert” and “From Adventure to Legend” – which has some old behind-the-scenes footage showcasing Spielberg’s directing and some raw takes. This isn’t one of those retrospectives with some new interviews but instead older stuff at the time of filming which is kind of cool to see.

Each of these has some interesting behind-the-scenes footage intermixed with cast/crew interviews. Nice thing is, none of them are mere filler.

While a bit shorter, they still expand more on the four movies with updated interviews. The featurettes marked with an asterisk (*) have optional pop-up trivia tracks. Raiders of the Lost Ark – ****¾/*****
The first movie in the franchise, now 31 years old, is presented in 1080p high-definition and its original 2.35 aspect ratio. According to the back cover, this one received a frame-by-frame full restoration and I can tell they did a fantastic job. Although it is the darker of the films, in terms of look rather than story, I was impressed with how clean it looked yet still retains the natural film grain that gives it the theatrical look I like to see.

Temple of Doom and Last Crusade – *****/*****
The next two films are even more impressive. Unlike Raiders, these “merely” received a color-corrected digital master transfer. The amazing detail level is what stands out the most while the color array looks about right without being pumped up or overly soft.

Kingdom of the Crystal Skull – ****½/*****
The final installment comes storming to Blu-ray presented in its Original Aspect Ratio of 2.35 (AVC/MPEG-4) on a 50GB Disc. Right from the THX start (and it looks awesome!) you will notice just how well Indiana has made the transition into HD. Colors are very vibrant and blacks (for the most part) are very dark and inky. The only disappointment here is that sometimes the HD makes some of the CGI look just a little to fake (the monkeys). But other than that, you should not have any issue with this transfer.

All four movies have been given a new 5.1 DTS-HD Master Audio track including Kingdom of the Crystal Skull where the original Blu-ray was Dolby TrueHD. There’s not a whole lot of difference between the movies which is a good thing given how great each lossless track is. John Williams’ amazing score blares through each channel, dialogue levels are nice and even while the action scenes shows off the tracks very nicely. Overall, the Indiana Jones: The Complete Adventures is a great set for fans of the franchise. Each of the film’s 1080p HD transfer is amazing to go along with the lossless DTS-HD Master Audio tracks. The only drawback is that features from the previous releases, including Kingdom of the Crystal Skull were not ported over. Also concerning is the $99.98 MSRP and in-store price at around $65-70, is a bit excessive, although if you can snag this set for about $50, then it’s most certainly worth it.

Check out some more screen caps for all four movies by going to page 2. Please note, these do contain spoilers.