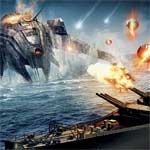 Battleship is what’s wrong with Hollywood. I have no problem with movies with mindless, simple plot-lines but at least show some effort rather than throwing $200M+ at the screen and hope people merely call it good. 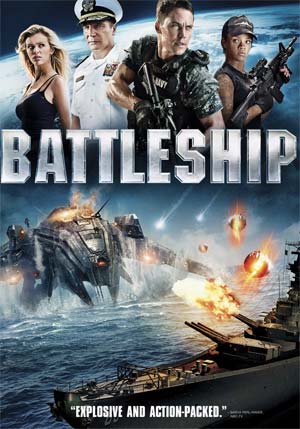 Preparing for Battle (11:09) tries to explain why and how the hell they came up with the idea to turn the board game into a feature film.

All Hands on Deck: The Cast (11:40) – This featurette introduces us to each of the major players. In between behind-the-scenes footage, Peter Berg and the cast talk about one another. A bit of a yawn but it does show that they at least had fun working together.

Engage in Battle (6:58) is a two-part featurette on shooting at sea and on the ships and the difficulties that come with them

Battleship is presented in its original 2.40 anamorphic widescreen aspect ratio and, for the most part, looks good. There are the occasional bits of normal artifacting for a DVD but the picture is clean and sharp enough. Nothing extraordinary here though it should be good enough for most home viewers.

The Dolby Digital 5.1 track provided is simply put, boomtastic. The dialogue levels are nice but the biggest feature is during the action scenes which put on a great show with an awesome LFE channel to go along with the front and rear channels which make for a dynamic track.

Overall, Battleship is what’s wrong with Hollywood. I have no problem with movies with mindless, simple plotlines but at least show some effort rather than throwing $200M+ at the screen and hope people merely call it good. Thankfully the North American audiences weren’t buying it since it only made $65M so hopefully that sends a signal to Hollywood that people expect more.