The Father of the Bride two-movie collection is a nice set with two very good movies with more than adequate video and audio transfers which are a solid upgrade over their DVD counterparts. 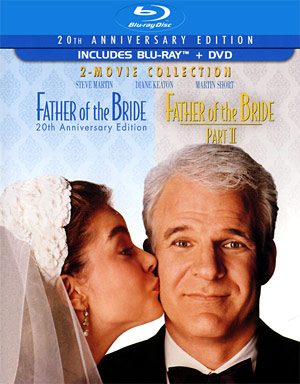 The movie opens with George explaining to the audience, in a tux with its tie loosened, about the ordeal that had occurred and recounts the experience: George owns a sports shoes manufacturing company and is anxious to see Annie return from a trip overseas. On his way home, he picks up a surprise present (fixing up her old bike) and finds she is already there, as vibrant as ever and seemingly different. He and the family find out why as she reveals that she met a guy, named Bryan (GEORGE NEWBERN), fell in love and are in fact engaged. Nina and her brother are surprised though congratulatory but George… not so much. After putting up a bit of a fight, he agrees to meet Bryan.

After a cordial but predictably awkward first meeting, the wedding plans are on beginning with hiring a wedding coordinator, the weird/quirky Franck Eggelhoffer (MARTIN SHORT) and his assistant, Howard Weinstein (BD WONG).

While having accepted the wedding and, to a lesser extent Bryan, George wants to penny-pinch as much as possible, dreaming up ways to save money from holding the ceremony at the house with a few guests and him behind the grill. But those dreams are soon dashed and Annie gets the wedding she wants with a nice, traditional church and a full fledge reception at the house. Unfortunately for George, the cost, as he tells anyone willing to listen, is $250/person and with over 500 people, you can do the math… You can guess the rest, but it’s more about the character and his journey than the wedding itself.

I remember watching Father of the Bride back in the mid-90s and even then, found it to be absolutely hilarious yet still heartwarming. It’s also one of the rare PG-rated movies that doesn’t pander to families by making it too safe or over-the-top with inane sound effects but instead keeps a level head even with George’s antics do touch the line of insanity, yet thanks to Steve Martin’s physical humor, works every time.

The supporting cast is another reason this remake of the 1951 comedy has endured the test of time and is now regarded as somewhat of a classic. The highlight of course is Diane Keaton who plays so perfectly opposite Martin’s subdued crazy mannerisms with a stern but calm demeanor. Also a delight is Martin Short in perhaps his last genuinely funny performance outside of maybe the sequel. And not to be outdone or overshadowed – well, OK, they kind of are – are Kimberly Williams and George Newbern. To be fair, these two do share some nice chemistry and for Williams, she manages to be likeable for a character that could come off a bit childish at times.

The second, and presumably final, part to the series finds George Banks (MARTIN), still a bit neurotic and it only gets worse when, just as he’s about to be accepting of son-in-law Bryan, is told that Bryan and daughter Annie (WILLIAMS) are pregnant. Complicating matters is, after getting frisky with wife Nina (KEATON) one night, Nina also gets pregnant and now mother and daughter are set to have their kids around the same time.

This review with be short and kind of sweet. Although not nearly as good as the first movie, this sequel still is sweet and incredibly funny from beginning to end. Steve Martin once again gets to show off some more of his physical comedy and this go around, where Martin Short was more of a cameo appearing for a few minutes here and there, gets a larger role and even though one would think his antics would get tiring, I thought it was a nice injection of energy.

Like with the first movie, I actually remember watching this with my parents back in my mid-teen years and while I enjoyed, my parents seem to get more out of it, which would make sense as those who are parents probably will get a more emotional impact versus those without.

This release contains 1 Blu-ray disc with both movies and 2 DVDs containing each movie. The DVDs are the original issue so they contain all the features including the mislabeled “Audio Commentary with Steve Martin and Martin Short” which again is portrayed on the back cover. For the sake of time, I’m only covering what’s on the Blu-ray disc, but will note the Father of the Bride Part II DVD contains an interview (3:53), a production featurette (4:21) and the theatrical trailer.

Audio Commentary – Co-Writer/Director Charles Shyer is absolutely dry and needed someone else in the booth to provide some life as this track quickly becomes droll even with Shyer providing information about the making of the film.

An Invitation to Father of the Bride (10:35; SD) – This is a standard ‘making-of’ featurette where you get a ton of behind-the-scenes footage mixed in with some interviews with the stars including Steve Martin and Martin Short. The filmmakers also explain what makes the movie special.

Martin & Short Interview Each Other (5:13; SD) – As the description states, the two stars question one another about the movie and their characters.

Father of the Bride — 4.0/5
Making its debut on Blu-ray, Father of the Bride looks very good in HD thanks to a new digital restoration. The movie is presented in its original 1.85 widescreen aspect ratio and although it doesn’t pop off the screen, it does offer up a clean picture free of any noticeable dust marks or scratches though there is a fair amount of grain which might turn off some people (not me).

Father of the Bride Part II — 3.75/5
While this transfer, again presented in its original 1.85 aspect ratio, isn’t quite as good as the first film, it still looks good. This transfer is basically spotless and doesn’t have much in the way of flaws including artifacting. Colors also seem to be well balanced without seeming pumped up and oversaturated.

Father of the Bride — 3.75/5
The original DVD release contained a standard Dolby Digital Surround track so for Blu-ray, it has been upgraded to a lossless 5.1 DTS-HD Master Audio track. The soundtrack itself with the score and music sounds great but then falters a tad when we get to the dialogue which probably wasn’t the best recorded on the set. Even so, outside of a scene or two, the audio is crisp and clean from beginning to end.

Father of the Bride Part II — 4.0/5
This 5.1 DTS-HD MA track comes off a tad better than its predecessor. Again, the bulk of the audio comes from the center channel since the movie is dialogue driven. However, when the whimsical score picks up, it provides a bit more depth.

Overall, the Father of the Bride two-movie collection is a nice set with two very good movies with more than adequate video and audio transfers which are a solid upgrade over their DVD counterparts. Even though the features are disappointing considering it is a “20th Anniversary Collection”, but with a low SRP, this is well worth picking up.