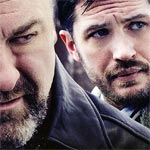 The Drop is a well made if not a bit ordinary crime-drama that excels with the main three actors headlined by Tom Hardy who continues to impress and there’s special interest with James Gandolfini being his final feature film and he gives his usual great performance.

** Click Here to Purchase The Drop on Blu-ray from Amazon.com ** Lonely bartender Bob Saginowki (TOM HARDY) and his hardened employer Cousin Marv (JAMES GANDOLFINI) run a bar that is used as a “drop” — a covert scheme that funnels cash to local gangsters. But when they find themselves caught in a robbery gone bad, and on the hook for a debt they can’t repay, both men have to make the dangerous choice between loyalty and survival.

Quick Hit Review: Although billed as a gritty crime-drama, this is far more a character film centered on Tom Hardy’s seemingly simple man Bob, somebody who has walked himself from the world only to be changed when finding a severely beaten dog in the trash outside the home of a lovely woman played by Noomi Rapace.

Although there are certainly criminal elements to it, and for his part Gandolfini is in fine form continuing what he started on “The Sopranos,” the bulk of the film is filled with solid performances headlined by Hardy who continues his rise that began in Warrior (and gained fame in The Dark Knight Rises).

This release comes with a matted slip cover. Inside is the redemption code for the Digital Copy.

Deleted Scenes (6:22; HD) – Four scenes are included with an optional commentary by Raskam and Lehane.

Under Promotional Featurettes (TRT 16:11) we get: Keeping it Real (3:54; HD) looking at the story and characters; Making of The Drop (3:45; HD) is a basic behind-the-scenes featurette with cast/crew interviews; Making Brooklyn Your Own (4:00; HD) covers the filming locations; Rocco the Dog (2:21; HD) where even the dog gets his own featurette about his importance to the story and the main character; Character Profile: James Gandolfini (2:11; HD) on the late and great actor with comments by his fellow actors and others.

Also included is a Gallery of promotional images and the Theatrical Trailer (2:23; HD). The Drop drops onto Blu-ray presented with a 1080p high-definition transfer and in a 2.40 widescreen aspect ratio. The picture for the most part looks fantastic with excellent detail levels throughout and colors generally are bright especially during the daylight shots while the night scenes, or those in the dimly bar, offer good contrast.

The DTS-HD Master Audio 5.1 track is more than adequate providing for clear dialogue levels and even though it’s not entirely dynamic considering the number of action scenes are few, it’s still a fine and impressive lossless track that primarily showcases Marco Beltrami’s drama-driven score. Overall, The Drop is a well made if not a bit ordinary crime-drama that excels with the main three actors headlined by Tom Hardy who continues to impress and there’s special interest with James Gandolfini being his final feature film and he gives his usual great performance. The Blu-ray released by Fox has good-to-great video and audio transfers and a fair amount of bonus material, far more than I thought would be included for a movie that got a limited theatrical release.