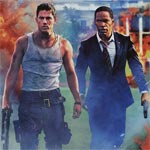 White House Down is a forgettable action movie which heavily borrows from other, often better, movies most notable Die Hard. The acting isn’t bad though Foxx and Tatum don’t share great chemistry and the screenplay is riddled with lame lines that don’t hit their mark and don’t get me started on the plot. 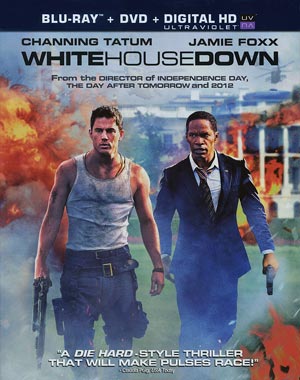 White House Down is the latest dumb, convoluted action film that takes itself far too seriously. Where did the fun Roland Emmerich of Independence Day go? Was his soul taken while filming the dark and bleak Godzilla? Whatever happened, this political action thriller falters on almost every level.

The film centers on a former soldier John Cale (CHANNING TATUM) who’s interview, led by a former classmate Carol Finnerty (MAGGIE GYLLENHAAL), for a position on the Secret Service doesn’t go well much to his disappointment, though he doesn’t tell his politically-obsessed daughter, Emily (JOEY KING), who has come with him and insists on joining the White House tour. While on the tour, and getting introduced to one lame comedic character in a guide named Donnie (NICOLAS WRIGHT). We also meet Finnerty’s boss, Martin Walker (JAMES WOODS), head of the President’s security detail. And wouldn’t you know it, a bunch of terrorists pick this day to wreck havoc in our capital city! Disguised as repairmen working on the WH theater system, they invade setting off an explosion sending crowds outside including Secretary of State Eli Raphelson (RICHARD JENKINS), putting the Vice President (MICHAEL MURPHY) into the air and trapping not only Cale and Emily inside, but President Oba… err… Sawyer (FOXX) as well.

When Emily gets separated, going to the bathroom when the chaos is unleashed, Cale goes out to find her while avoiding the terrorists. But when he comes across the President cornered by Walker who is revealed to be the ringleader, Cale takes it upon himself to save the day and protect Sawyer, keeping him alive and attempting to get him out before the bad guys get their hands on him as the President is a part of their diabolical, and inane, plans.

From here on, it’s just Die Hard in the White House minus Willis’ charisma (at least through the first three films) and a sensible plot (again, through the first three). The plotline here is so stupid and as the film progresses, it doesn’t get much better. Oh, and there’s one more twist revealed and more than an insult, one could see it coming two miles away that they should’ve revealed it far sooner. The scriptwriter, James Vanderbilt, also plays fast and loose with the line of power and how it works, namely with a primary device that goes with the Presidency. With regards to Vanderbilt, I was a bit shocked to see he was behind Zodiac… as well as Basic, The Rundown and The Losers so not an entirely fantastic resume. But outside of the idiotic plot, the technical aspects don’t fare much better. I can’t name a time when a Roland Emmerich movie featured such outlandishly horrible visual effects. No, it’s not quite SyFy Original Movie bad but there’s more than one instance when I could only shake my head at how ridiculous it looked.

The cast isn’t much better. Channing Tatum I suppose makes for an acceptable action star and Jamie Foxx doing his best Obama is OK, but the two of them together don’t share very much chemistry like other buddy flicks; Joey King isn’t overly annoying like other child actors though her flag-waving moment was beyond laughable; and Maggie Gyllenhaal gets very little to do other than act horrified by the events while inside a lavish high-tech set.

As I wondered in my opening, where is the Emmerich from Independence Day? Sure, that story wasn’t great but between Will Smith and Jeff Goldblum and some kick ass action sequences, it was a fun summer action piece where White House Down has none of that and is ultimately a forgettable action flick which takes itself a bit too seriously and most certainly wears its politics on its sleeves… This release comes with a glossy and semi-reflective slip cover. Inside is the retail DVD Copy as well as a redemption code for the UltraViolet Digital Copy. All told there are 13 featurettes totaling around an hour.

A Dynamic Duo (4:09; HD) is a short promo featurette highlighting the pairing of Jamie Foxx and Channing Tatum and why they work so damn well with one another.

Men of Action (3:43; HD) – This featurette provides some BTS footage of the different action scenes and stunt training.

Roland Emmerich: Upping the Ante (5:08; HD) – The director gets his own featurette where he provides comments on approaching the story and filming.

Crashing the Oval Office (3:49; HD) focuses on one key scene as a vehicle, well, crashes into the oval office and how it was filmed. ** Blu-ray Exclusive **

Recreating the White House (9:23; HD) where you can get an inside look at how the sets were made since, you know, they couldn’t film on location. ** Blu-ray Exclusive **

Meet the Insiders (5:13; HD) looks at the supporting cast members.

Previews – After Earth, Elysium, Grown Ups 2, This is the End Sony releases White House Down on Blu-ray presented with a 2.40 widescreen aspect ratio and a 1080p high-definition transfer. While the visual effects were wonky, the picture quality is nothing short of spectacular. The detail levels are excellent, blacks stark and deep and the colors nicely balanced and have a good pop off the screen.

The 5.1 DTS-HD Master Audio track also packs quite a punch from the numerous action sequences to the few quieter moments. The center channel is used for dialogue and central action whiles the front and rear speakers kick into gear for depth and ambient noises. Also getting used is the LFE track which gives it some good intensity. Overall, White House Down is a forgettable action movie which heavily borrows from other, often better, movies most notable Die Hard. The acting isn’t bad though Foxx and Tatum don’t share great chemistry and the screenplay is riddled with lame lines that don’t hit their mark and don’t get me started on the plot. I can’t say it’s a bad movie but it’s hardly good either and is at best worth a rental. The Blu-ray does have excellent audio/video transfers and there’s a fair amount of fluff features.