“Robot Chicken”: Season 6 continues to be a successful and very funny series for Adult Swim. The comedy is often gold and Seth Green and company often cross the line offending multiple people and cultures with off-color humor. The Blu-ray released by Warner Brothers once again has some great bonus content while the audio/video transfers weren’t great but still adequate considering the subject. 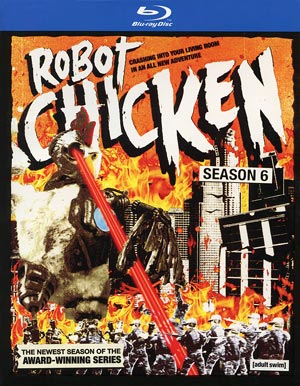 Note: Portions of this review were copied from the season 5 review. The “Robot Chicken” series has been offending nearly everybody in the world and telling off color jokes and dammit, six seasons in and a couple specials, it’s still pretty dang funny. This sixth season the gang takes on G.I. Joe, taking out Osama Bin Laden, suicide bombers, the absurdity of the show “Hoarders” and other clever humor some dealing with current times but more often than not, some great shots at nostalgic figures and toys. Oh, and in a bout of randomness, they also have fun with Wilson from “Cast Away”.

So… um… “Robot Chicken” really isn’t a complicated show so all I can say now is that although I do believe previous seasons were a bit better but season six does have some funny bits and the voice guest stars are as stellar from Melissa Joan Hart (briefly reprising Sabrina), Sarah Michelle Gellar, Freddie Prinze Jr., Linda Cardellini and Matthew Lillard (as the “Scooby Gang”), Evan Rachel Wood, Olivia Wilde, Billy Zane, Patrick Stewart and many others.

Episodes:
1. Executed by the State
2. Crushed by a Steamroller on My 53rd Birthday
3. Punctured Jugular
4. Poisoned by Relatives
5. Hurtled from a Helicopter into a Speeding Train
6. Disemboweled by an Orphan
7. In Bed Surrounded by Loved Ones
8. Choked on Multi-Colored Scarves
9. Hemlock, Gin and Juice
10. Collateral Damage in Gang Turf War
11. Eviscerated Post-Coital by a Six-Foot Mantis
12. Butchered in Burbank
13. Robot Chicken’s ATM Christmas Special
14. Papercut to Aorta
15. Caffeine-Induced Aneurysm
16. Eaten by Cats
17. Botched Jewel Heist
18. Robot Fight Accident
19. Choked on a Bottle Cap
20. Immortal

All in all, “Robot Chicken”, which is uncensored, continues to have success even after five six seasons merely using puppets and outlandish gags. The crew Seth Green and Matthew Senreich have brought together is top of the line in delivering mostly hilarious skits (I say mostly since, like in any series, you will have your duds). This might not be the strongest season they’ve done but it’s still really entertaining and worth checking out especially if you’re a fan of often juvenile humor and/or non-PC jokes.

The single-disc set contains all episodes and features and comes with a matted slip cover.

Episode Commentaries – All 20 episodes receive a commentary track. I won’t list every one of them, but the notable participants include: Seth Green (all but 1 episode), Skeet Ulrich, Zachary Levi, Billy Zane, Sarah Chalke, Alex Winter and Lacey Chabert.

FEATURETTES (TRT 50:39; HD)
Making of Season 6 (10:08; HD) is a fun look, with interviews by the crew, and some of the guest voice cast, at the sketch writing, model building, visual effects, stop motion animation, etc.

The Wilson Identity: From People to Puppets (1:33; HD) is footage of the crew creating the action in the “Wilson” sketch.

They Came to Play (5:35; HD) is footage of the various guest voice actors.

Our First Ladies (6:15; HD) looks at the female writers on the show.

Kirkman on Kirkman (2:26; HD) is an interview with “Walking Dead” creator Robert Kirkman who made a cameo in an episode.

Outtakes (3:53; HD) from the voice sessions as the actors goof off.

My First Time… (1:43; HD) gets the thoughts from the first-time voice actors.

The Dirt on Seth and Matt (2:23; HD) – Various people who worked on the season discuss stories about Seth Green and Matt Senreich.

The Inside Joke (2:00; HD) has the writers talking about some of an inside joke featured on the show.

The Benefits of “Robot Chicken” (3:31; HD) – The crew discuss some of the benefits of working on the series (i.e. attempting to pick up women).

Who the F*** is Zeb? (6:14; HD) is a featurette about new writer/director Zeb Wells from those around him.

Post-Apocalyptic Future of Holidays (4:54; HD) focuses on one of the sketches and filming footage in the desert.

THE REST:
Deleted Channel Flips (13:10) are the sketches that didn’t make it to the final cut… and for good reason.

Chicken Nuggets are video sketch commentaries for the episodes ‘Executed by the State’, ‘Robot Chicken’s ATM Christmas Special’ and ‘Immortal’. “Robot Chicken” arrives on Blu-ray with a 1080p high-definition transfer. The show is presented in 1.78 widescreen aspect ratio and is on par or most likely exactly what was shown on Cartoon Network. Colors are bright and the detail level, for clay/action figures/animation, is good. I can’t say this would be a whole lot better than the DVD except maybe less pixilation.

The Dolby TrueHD 5.1 included is more or less the same as the fifth season where the bulk of the episodes are dialogue heavy and are pretty crisp and clear while the action elements sound decent but don’t offer much depth. It’s probably on par with a standard Dolby Digital 5.1 track. Overall, “Robot Chicken”: Season 6 continues to be a successful and very funny series for Adult Swim. The comedy is often gold and Seth Green and company often cross the line offending multiple people and cultures with off-color humor. The Blu-ray released by Warner Brothers once again has some great bonus content while the audio/video transfers weren’t great but still adequate considering the subject.